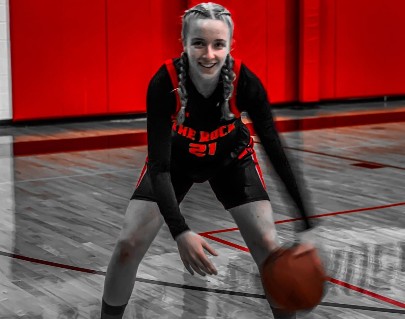 A native of Kosovo in Europe, Pushkolli recently moved to Bella Vista Prep, after a stint in Florida high school basketball. Pushkolli has loads of international playing experience, as you has already competed on the U16 and U17 international teams in the Women's European Championships, and has competed against older competition throughout her life. As a result, she is very skilled, tough and carries a wealth of playing experience against tough competition - positioning her for a great future ahead of her.

Pushkolli's skillset, playing style and experience abroad makes her an immediate impact prospect for the Division-I level, and many college programs are taking interest in her early in the recruiting process, as a result. Pushkolli has received Division-I offers now from Fresno State, Duquesne, Murray State and Delaware. She also has an offer from the University of Mobile-Alabama to her credit.

Pushkolli is just a mere junior, and already has (4) different D-I offers for herself, which is a nice list this early. I expect Pushkolli to become one of the hotter girls' prospects in the country over time, and generate much more recruiting interest and offers over the next 6 to 10 months. She is a high-major girls prospect, and has the ability to play at the highest level.

Pushkolli is a very skilled guard prospect with an advanced offensive skillset. Able to score from all (3) levels, Pushkolli has unlimited range on her jump shot and a very quick release. She can get her shot off quite easily against defenders, and also can get anywhere she wants to on the floor to get it off. She is a very good creator off the dribble, and can make scoring opportunities for herself and her teammates. She is a very good finisher as well and finishes strong in the lane and also in the open floor. She is also a very strong ball handler - making her even more difficult to defend for opposing teams and guards. Defenses have a difficult time containing her, as she is a threat to score from anywhere on the floor.

Pushkolli's best asset is her ability to make players around her better with her unique ability to pass the basketball, in which she sees plays before they happen and leads her teammate with the pass - often times when her teammates do not even see the ball coming. She is a very willing passer and enjoys making plays for her teammates. She is also a strong defender with quick hands and feet, and plays passing lanes with aggression. Her intense playing style often lead to turnovers by the opposition.

While still a junior, Pushkolli is a plug and play guard prospect for the future, and among the elite prospects in Arizona's 2022 Class. It is just a matter of time when she sees her recruiting stock raise to an even higher level with college programs, as she will play a very loaded national schedule this season on the Grind Session.