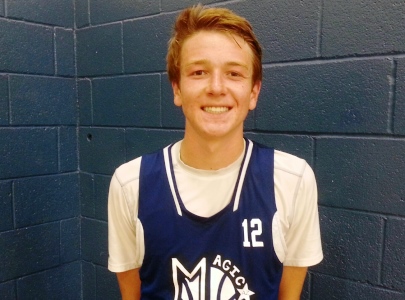 For the second year in a row, Perry High School would win the Paradise Valley Invitational - one of the best pre-season Thanksgiving basketball tournaments in the state, and my favorite pre-season tournament to attend.

Paradise Valley High School head coach Mark MacGowan and his staff always put on an excellent event, and it is annually filled with many of the state's top basketball programs.

This year's event was no different as the championship game would feature host high school Paradise Valley HS and Perry HS, which features one of the state's elite talents - 5-foot-10 superb sophomore guard Markus Howard (Arizona State commit).  With Howard helping leading his team to last year's tournament championship alongside his brother Jordan Howard, who has now moved on to college, everyone wanted to see just how good Perry would be this season with the younger Howard leading Perry by himself.

Well, Perry would answer, but it would be another underrated prospect that would lead the way for Perry - 6-foot-3 senior guard Coby De Laveaga.  De Laveaga would pour in a game-high 28 points to lead his team to a consecutive annual tournament championship, a 66-60 championship victory over host Paradise Valley.

De Laveaga would come out hot from the start of the game - connecting on (4) three-pointers in the first half, and finishing with a game-high 17 points by halftime.

De Laveaga's scoring outburst would help Perry overcome a first quarter deficit to Paradise Valley, 21-26.  Paradise Valley 6-foot-3 senior forward Cedric Jacobs Jones would get going early in the first half to help his team to an early lead.  Jacobs Jones would convert a couple three-pointers, and scre inside and out early - creating a mismatch for the Perry post players.

Perry would take a narrow halftime lead, 35-34, behind the play of De Laveaga and Markus Howard, although Howard would struggle to find his shooting stroke in the first half.  Howard would get some good looks, but the ball would not fall for the talented guard prospect.

The game would remain very close in the second half for both teams, but Perry would keep the lead for the entire second half.  Markus Howard would foul out of the game with :35 seconds left, but the scoring of De Laveaga would be enough to push Perry to the win.