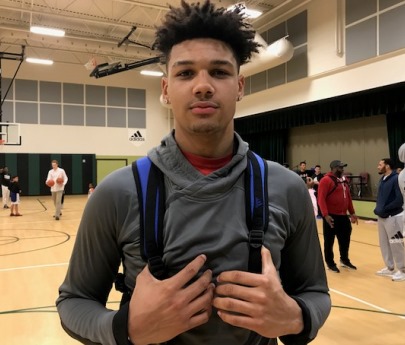 Hillcrest Prep has been consistently known for having top-rated national talent over the years, after featuring such top-rated future NBA prospects previously as Marvin Bagley (Duke) and DeAndre Ayton (University of Arizona).  The program is currently led by one of the nation's premier talents, Arizona State commit, 6-foot-5 sophomore do-it-all guard Kyree Walker.  Recently, the program received another big-time talent when 6-foot-11 sophomore post Davion Bradford left the state of Missouri, and arrived at the Hillcrest Prep program.

Bradford attended Christian Brothers College Prep in Saint Louis earlier this season, before moving to the state of Arizona in December.  Bradford is now finishing up his sophomore season at the basketball power, joining forces with Walker, KJ Hymes (University of Nevada signee), Demarius Jacobs and Dischon Thomas (University of Nevada commit) - giving Hillcrest a formidable group of prospects for the remainder of the prep season.

Last week, still early in the recruiting process, Bradford received a scholarship offer from the Arizona State Sun Devils - first of many offers that Bradford will now look to receive in the West after moving to the region.

Bradford is a large post prospect with a huge body, hands and physical strength.  While he is not overly athletic and still needs some work on his footwork, he takes up a lot of space and is a tremendous post presence that will only blossom over time, as he continues to mature physically.  Bradford is a good low-post scorer already that possesses a good jump hook and takes the ball up to the rim, which allows him to draw physical contact and finish plays strong at the rim.  He is effective inside the paint, and does not mind physical contact.  In fact, he relishes it and wears down opposing post players.  As he develops his low-post skills over the next two years, Bradford will become a load inside and around the paint.

Bradford is an active rebounder and shotblocker that makes it difficult for opposing teams to be effective offensively inside the paint, as a result his size and presence.  He runs the floor hard and gets up and down the floor well for his size - a nice attribute.  Bradford also starts the break well with outlet passes to streaking teammates heading up the court.  He also can see quite well above the defense in press situations, and is a solid passer of the basketball.

Bradford has the size and resemblance to current NBA player and former Duke standout Jahlil Okafor.  Nowhe will need to simply work hard on and off the court to develop, but this young man is a definite high-major division-I prospect for the future - adding seriously to an already loaded 2020 Class in the state.

I look forward to watching Bradford develop over the next two years, and welcome this budding young prospect to the state of Arizona.

Hillcrest Prep currently plays on the national Grind Session league, and competes against some of the top talent and programs in the country.