David Grace rising to the top 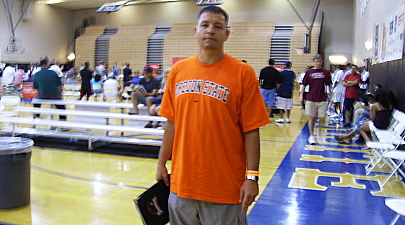 Former Arizona high school basketball coach David Grace has worked extremely hard over his many years in his basketball career to overcome adversity and obstacles to reach his dreams.

A native of Aberdeen, Maryland, Grace began his coaching career in the state while a part of Boo Williams' basketball program in Virginia.

Grace would serve in the Air Force for 20 years, undertaking many operations in Turkey, Georgia, Iraq and in the United States. While serving in the armed forces, Grace continued to pursue his love of basketball and eventually became stationed in Arizona.

While in Arizona, Grace would pick up his coaching career at Trevor Browne High School under the leadership of former varsity head coach Mike Ellsworth. Grace would coach the freshman and junior varsity teams at the school for numerous years, while also leading his own club team as a part of the Arizona Stars Nike-sponsored club program.

As an assistant coach to Ellsworth at Trevor Browne for many years, Grace helped to develop such players as Ty Morrison (Creighton University), Daren Jordan (Oral Roberts) and Kaleo Kina (Navy).

In 2000, Grace would begin leading the Arizona Magic club program - coaching the program and developing much of the state's top talent. Grace and the Magic would receive national acclaim - finishing very strong in numerous major AAU/club events around the country.

While a great coach during the high school season, Grace developed his name in the basketball circles while coaching the Magic travel program. Grace coached the Magic to several top finishes in many local and national tournaments. The recent and past success of the Magic organization helped to place Arizona basketball firmly in the minds of college coaches across the country.

After resigning at South in 2006, Grace would knock down another of his major personal goals - becoming a college coach. Grace would accept a position as an assistant coach at Sacramento State, where he would spend one season.

After spending a season at Sac State, Grace would move up quickly again - accepting an assistant coaching position at the University of San Francisco under then head coach Jesse Evans. Evans would get forced to resign by the school's administration a year later, in what would become a legal battle for Evans. With Grace caught in the middle, David would again have to look for a job for himself.

Robinson, the brother of United State first-lady Michelle O'Bama, would give Grace the opportunity of his coaching career, as he would make Grace a full-fledged assistant coach in just months after taking the position. Grace would reel in top-rated college prospects Joe Burton and Roberto Nelson after just months of getting the coaching position for the Beavers.

Grace is now in his fourth season as an assistant at Oregon State. Since taking over the position at Oregon State, Grace has helped Robinson develop the basketball culture and program at Oregon State once again - returning the program back to respectability. This season, the program has played tough each night out and has a chance to win every game.

This weekend, Grace will return to the state of Arizona, a state that he helped transform in the sport of basketball. But he won't be coaching for a high school program or a club program - instead, Grace will be assisting the Beaver's program in PAC-12 battle against the University of Arizona and Arizona state University.

Next goal in line for Grace though is his ultimate goal - a head coaching position in the division-I ranks.

With the recent resignation of former Northern Arizona head coach Mike Adras, Grace has applied and looks to be one of the front-runners for the position. If hired, Grace would bring respectability back to the Northern Arizona basketball program as well - quickly bringing in top-rated players as a result of Grace's many relationships, and also a culture of hard work and accountability.

Judging by the path of Grace's basketball career, if he doesn't get the Northern Arizona head job, he will get another head coaching position soon because he is determined like no other.

Just another obstacle for Grace to overcome.