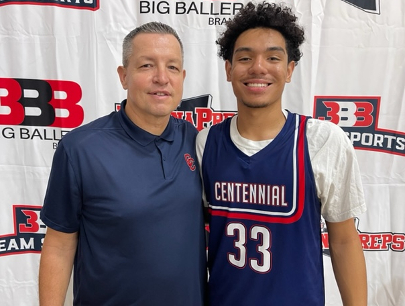 With the new 2022-2023 high basketball season set to begin this week around Arizona, there will be many programs looking to put it all together this high school season and win it all. For Centennial High School, they will be looking to defend their 5A State Title from a year ago, but are just as hungry again to win it all. After finishing with a very impressive 25-5 overall record last season, a lot has now changed for the program this season, as New Head Coach David Grace takes over the helm, and will now look to lead this year's version of the Coyotes' basketball program, while also developing a culture of success at the program that will pay dividends for years to come.

I have watched this Centennial program develop a great deal over the years, and they did it the right way - building from the inside out. While very young, at one time, and not too long ago, this program developed over the years into a major winner - bringing home a 5A State Championship in 2022. After the departure of former hard-working and diligent Head Coach Randy Lavender after last season, the school had former long-time successful Division-I coach David Grace fall into their lap, after Grace decided to become a high school coach - a wonderful opportunity for the Centennial basketball program.

David Grace (pictured), while well known for his amazing exploits as a Division-I Head Coach and being among the top overall recruiters in America consistently, is still in his pure element of helping the youth. While known for recruiting top-level national basketball talent to respective college programs, Grace is also first remembered for his days at Trevor Browne High School, coaching under legendary Mike Ellsworth, and also building South Mountain High School back into a State Championship program also. While many believe that Grace will make a return to college coaching at some point, he is very happy working with the youth at Centennial High School and continuing to build something special in Northwest Phoenix.

"I am very happy here," said David Grace. "We have great kids and this is what I love to do. We have something very special here at Centennial."

Grace will lead a very talented again that returns a lot from last season, although the program lost a few integral parts to last year's team in Jake Lifgren (Point Loma University) and Trenten Lavender. This season's team will be led by the versatile, do-it-all play of 6-foot-4 senior Emery Young (pictured), who will look to have his best season of his high school career this season, as he will be the program's leader, on and off the court. Young is a skilled wing prospect that can defend multiple positions on the floor, and brings the intensity needed to carry his team all season. Young averaged 13.9 points and 5.4 rebounds per/game as a junior. Young's play will be the catalyst for what the Coyotes do this high school season.

Imposing 6-foot-4 senior forward Gage Galbreath will also be a force this high school season for Centennial, as the two-sport star returns, after a strong junior season, where he posted 11 points and 6.5 rebounds per/contest last season. Galbreath, like Young, will look to post even bigger numbers this senior season, and will hold down the front court all season long for the Coyotes - defensively, on the glass and inside the paint. Galbreath is a tremendous athletic talent with size and physicality, and the combination of him and Young in the front court can match up with any program in the state.

Centennial will be very well balanced this high school season, as there are numerous other prospects that return this season, and will make this team tough to beat. The program has a nice combination of returnees and young prospects that are coming into the program, so the team will be very deep and play with extreme confidence all season long. The addition of David Grace as their leader, combined with a very experienced group of assistant coaches, will have this team playing hard and fast and with intensity. Centennial will be exciting to watch this season, and they shouldn't miss a beat from a season ago, where they dominated their competition. The 5A Division this high school season will be fierce, but Centennial High School is more than up for the challenge.