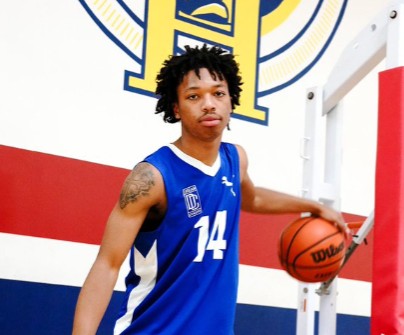 With the consistent COVID-19 pandemic in the state of Arizona, and the uncertainty around the start to the 2020-2021 high school basketball season, many Arizona prospects are mulling over their immediate futures. As a result, some prospects are looking to move to prep programs, which have already began their high school seasons, and in fine fashion. The latest prospect to change high schools is a big one, as Desert Vista High School's talented and explosive 6-foot, 165-pound junior guard Daean Lecque has changed high school programs, and will now team up with Mike Foster and a talented group of prospects at Hillcrest Prep for his junior season.

Lecque made the announcement and the change this week, and immediately suited up with Hillcrest Prep in a game this week - showcasing his skillsets with a very athletic and talented group for a big win over an overmatched opponent. Lecque decided to leave 6A defending state-champion Desert Vista HS, while the program waits to find out what will happen with their season. Lecque decided he could not wait any longer.

Lecque recently received an offer from Arizona State, and also has offers from Boston College, Loyola Marymount, Hofstra, Morgan State and Southern Utah, with many more college programs looking to get involved.

Lecque has been very consistent in his ability to make plays at a high level, and has proven to be one of the toughest guards to defend, or even slow down for opposition. His ability to score the basketball is unique, as he has an advanced offensive skillset and athleticism that allows him to play much bigger than his size suggests. Lecque is a point guard prospect with a proven scorer's mentality, but he also has an advanced ability to handle the basketball and run a team, especially for a player his age. He has command presence on the basketball court, which shows that he plays with superior confidence on the floor and knows he belongs on the floor, regardless of the competition. He is a unique find for a point guard prospect, as he has excellent toughness and loves to compete against anyone.

Lecque is the younger brother of current NBA guard Jalen Lecque (Phoenix Suns), who made the jump directly to the NBA from Brewster Academy in New Hampshire. He comes from a strong line of ball players in a family where both parents highly understand the game of basketball, and also the process it takes to be highly successful at the craft.

Competing with such a talented group of prospects this season at Hillcrest Prep on a national schedule, while also being featured on a team that ultimately features the nation's #6 overall prospect by ESPN, Mike Foster, Lecque should benefit a great deal in his exposure to college coaches, scouts and media, which will ultimately benefit his college recruitment.

The move by Lecque though will almost certainly dismantle any chances of a repeat performance for a 6A State Championship by Desert Vista. The Thunder, which lost junior guard Andrew King (Rice commit) to a transfer to PHH Prep this past spring (2020), also lost their other starting guard this week also, as 6-foot-1 senior Marcus Wady decided to move to the state of Texas, where he will play his senior season.