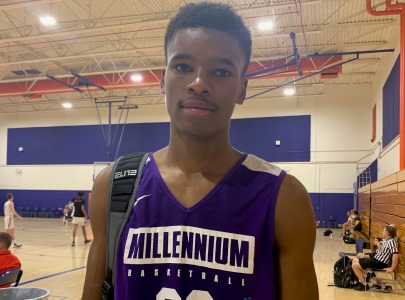 One of the state's elite overall talents, regardless of class, and the top overall prospect in the state's AIA ranks is Millennium High School's gifted and dominant 6-foot-9, 205-pound junior forward/post DaRon Holmes. After a high school season where he led a young Millennium team to a 6A State Championship runner-up finish, Holmes completely took his game to another level this off-season and returns as a junior to complete some unfinished business - winning it all.

Holmes is changing the game in Arizona, as last season he and his young Millennium teammates surprised many Arizona basketball enthusiasts by finishing with a strong 22-7 overall record on the season with a very young team. This off-season, Head Coach Ty Amundsen and his talented young group of prospects took it to another level - winning just about everything they competed in. Holmes was the catalyst for the team's success, as the majority of teams failed to match-up with such a talented and dominant bigger, versatile post prospect.

The state of Arizona has rarely seen a prospect like Holmes take the floor of the Arizona hardwood - a big post prospect with superb length and versatility. Holmes is a complete mis-match problem in the AIA ranks or on the club circuit. Whatever level he plays in, Holmes is a unicorn prospect that changes the way defenses prepare for him and his teammates. What makes him even more difficult to defend is that he is able to handle the basketball in the open court or on the perimeter and make plays for himself and his teammates. He has a high basketball IQ and is a very willing passer that enjoys seeing his teammates have success - a rare quality for today's elite prospects.

The college recruitent for Holmes is already completely on another level, as he enters his junior season at Millennium, and it will only continue to grow a great deal, which is scary. Currently, Holmes holds offers from a long list of college programs. He has offers from Kansas, Arizona, Marquette, Arizona State, Vanderbilt, Texas Tech, California, USC, Wake Forest, Grand Canyon, Ole Miss, Minnesota, Pepperdine, UTEP and New Mexico.

Holmes is coming off an excellent sophomore season at Millennium High School, where he led his young high school program to a nice 22-7 overall record on the season, and a big 5A State Championship Runner-up finish. Millennium would fall to state champion Gilbert HS in the 5A's final game, 38-37. As a sophomore, Holmes averaged 16.1 points, 9.2 rebounds and 3.2 blocks per/game, and he should absolutely blow up as a junior and dominate the state's high school competition.

Holmes is a very long and rangy prospect that runs the floor like a guard, and enjoys getting out into the open floor.  He is an athletic post performer that is able to score inside and out, with a variety of offensive skillsets, and excellent potential and upside for the future.  He is a good shooter with range on his shot, and has excellent feet and hands - a unique overall prospect and talent that is rarely seen in the state.

This young man is also a very fine young man with an excellent personality and attitude - which really makes him enjoyable to be around. He is a rare find today among elite-level prospects, and I believe that there are no limits to this young man's potential for the future - a definite future pro prospect with continued hard work and development.

Arizona Hoop Review Scouting Report: Holmes is a big-time young talent with a very bright future ahead of him.  While he is still growing and developing as a college prospect, the future is now for Holmes, who is already an absolute dominant prospect in the state. Holmes is a very long and rangy prospect that runs the floor like a guard, and enjoys getting out into the open floor where he is an excellent finisher.  He is an athletic post performer with a variety of offensive skillsets, that allow him to score inside and out, while being able to handle the basketball in the half-court set and in the open floor, where he is able to make plays for himself and others. A complete mis-match for opposing teams and defenders. He has excellent potential and upside for the future, combined with a very good overall skill level.  A good shooter with range on his shot, that will develop over time. A good post player with good low-post footwork and very good versatility.  He has excellent feet and hands.  An active rebounder and shotblocker that rebounds outside of his area, and contests and changes shots, while keeping balls in play to set up fast-breaks for his team.  Will continue to grow much more over the next couple years physically, and will blossom into one of the nation's elite high-major prospects.