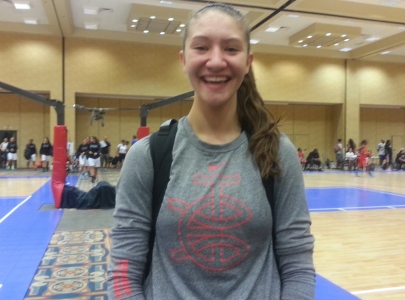 One of the top overall girls prospects in the state is now off the recruiting board, as Boulder Creek High School’s talented and gifted 5-foot-10 senior guard Darian Slaga has made her college decision.  While it looked as though Slaga might wait until the late, spring signing period to make her decision, Slaga decided to pull the trigger - choosing to verbal to the University of Portland and head coach Cheryl Sorenson and her women's staff.

Slaga had indicated that the University of Denver was in the lead during the spring and it had looked as though she would eventually verbal there, but she chose to select University of Portland over offers from Denver, Gonzaga and San Diego.

According to Slaga's father, Dean Slaga, his daughter decided that the balance of academics and basketball weighed heavily in her college decision.  Darian would like to pursue a career as a physical therapist in the future, and the academic program at Portland suited her nicely.

Slaga has grown physically a great deal over the past two years and, as a result, she is much stronger physically and is able to get her shot off at will against smaller defenders.  She has a nice ability to handle the basketball and rise up over defenders and make shots – possessing a very nice mid-range game for herself.  Slaga has developed her advanced skillset on and off the basketball court through coming from a strong basketball family.  She was coached by her father for many years – developing her into a serious basketball prospect over time.

As a sophomore starter for head coach Josiah McDaniel, Slaga did everything she could to help her team win – displaying serious emotion on the floor and playing her heart out.  She would average 13.4 points, 3.5 rebounds and 2.1 steals per/contest.  While leading the team to an 18-11 record in the state’s competitive Division-I Class, Slaga would help lead the team to the state playoffs before a playoff loss to Xavier.  As a freshman starter, Slaga was invincible – averaging an eye-popping and team-high 18.3 points, 3.7 rebounds and 3.9 steals per/game.

After having a terrific high school career already, Slaga averaged 17.8 points, 4.8 rebounds and 4.1 steals per/game last season as a junior, while leading her team to a 15-12 overall record on the season.  Look for Slaga to have a huge senior season for herself, especially with the weight of her college recruitment now off her shoulders.

Congratulations to Darian and her family on this amazing accomplishment from our staff here at Arizona Preps, and we wish her tremendous success for the future.