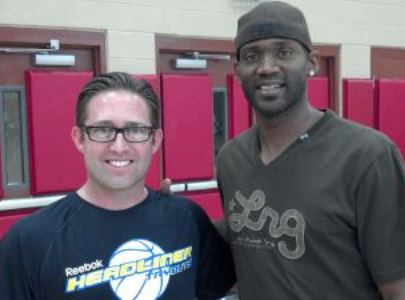 Arizona high school student-athletes today do not know much about Arizona's rich high school basketball tradition, but the state of Arizona has produced a large number of top college and professional players over the years.  While the state is not widely recognized as a hotbed for basketball talent around the country, when you stop and think about it, if you know anything about our rich history, you would realize that the state has produced many great players at every college level - players that have paved the way for many Arizona high school basketball players today.

Two of the best to have ever done it in this state are Damin Lopez (pictured left) and Gerald Brown (pictured right).  Lopez and Brown are two of the best high school basketball players that ever laced them up on the Arizona hardwood, and these young individuals both played at the highest level I have ever seen in this state.  In fact, if these two former players played today, in the new world of recruiting, exposure and social media, both would have been household names around the country and seen much better professional careers.

Damin Lopez played at Apollo High School in the late 1980's, and graduated in 1989 - leaving the Arizona high school ranks as one of the top scorers of all time in Arizona high school basketball.  Lopez played for his father, Arizona coaching legend David Lopez,  at Apollo.  He was named as the Arizona Player of the Year by the Phoenix Gazette and the co-Player of the Year by the Arizona Republic after averaging 27.6 points per/game as a senior.

Damin then went on to star at Pepperdine University where he spent 5 seasons at the program (1990-94), and was the starting point guard his final three years at the school.  Lopez still ranks second all-time in three-pointers made (239) and seventh all-time in assists (363) at Pepperdine.  He holds the school's records for three-pointers in a game (nine) and for percentage in a season (.472 in 1991-92).  He was named to the All-WCC first team as a senior and was honorable mention as a sophomore.  He also made the All-WCC Tournament team as a junior and senior.

Lopez led Pepperdine to the NCAA Tournament in 1991, 1992 and 1994 and the NIT in 1993.  The Waves won three WCC regular-season titles and three WCC Tournaments during his tenure.

He graduated from Pepperdine in 1994 with a degree in business administration.  He went on to have a brief stint with the Phoenix Suns, and with the Mexico City Aztecas of the Continental Basketball Association, before suffering a career ending injury.

Former Pepperdine head coach Tom Asbury had this to say about Damin as a player, "As a player he was an overachiever, and pound-for-pound he was the most fundamentally sound player I've ever coached.  If he had been 6-foot-2, he would have played in the NBA for 15 years."

Damin then went on to become an assistant coach at Pepperdine for four seasons before resigning in December 2011 to spend more time with his family.

Lopez is a true supporter and developer of Arizona's top basketball talent, as he spent 12 seasons at St. Mary's HS, assisting his father David Lopez, and developing the program into one of the premier programs in the state.  At St. Mary's, Lopez helped to develop such NBA players as Channing Frye (Cleveland Cavaliers) and Jerryd Bayless (Philadelphia 76ers).  In the 12 seasons that Damin was part of the St. Mary's staff, the school won the state title in 2001 and was part of (5) Final Fours and (9) Elite Eights.

Lopez also was the head coach for Chaparral High School, Glendale Community College and now has returned home to St. Mary's, where he is looking to rebuild the Knights' basketball program.

Gerald Brown was a star guard in Arizona also in the late 1980's and early 1990's, and graduated in 1993.  Brown played for then legendary Arizona program Carl Hayden High School and legendary head coach Argie Rhymes.  Brown was the Arizona High School State Player of The Year in 1993, leading his team to a 29-1 record and 5A state championship.

Brown then also signed with Pepperdine University and was an amazing three-time First Team All-West Coast Conference performer at Pepperdine, where he led the conference in scoring during the 1996 season.

Brown went on to enjoy a tremendous 14-year professional playing career - playing in the NBA for the Phoenix Suns, and then playing overseas for many years in Israel, Serbia, Germany, Spain, Australia, Poland, Mexico, Argentina, Venezuela, and Puerto Rico.

After his playing career, Brown has also went on to have an illustrious coaching career.  He was the head coach of the Arizona Scorpions of American Basketball Association (ABA), a semi-professional team located in Phoenix.  As head coach, Brown led the Scorpions organization to its first ABA Final Four berth in 2014-2015.

Brown then went on to serve as an assistant coach at Arizona Christian University (ACU).  While at ACU, Brown helped lead the team to a 25-9 overall record - surpassing the school’s all-time record for wins in a season. The Firestorm won their first ever NAIA Tournament game and advanced to the round of 16.

Brown currently is an assistant coach at Concordia Irvine College in California, and is entering his third season under head coach Ken Ammann - helping the Eagles to a first place finish in the PacWest in 2016.

These two former players were as good as I saw come out of the state of Arizona, and our Arizona Preps' staff would like to thank them for their accomplishments and all they have done and continue to do in the sport of basketball.  They paved the way for many Arizona basketball players today, and, on this Thanksgiving holiday, we would like to give them thanks for their amazing careers in the sport.

Arizona Preps will continue to bring you updates on many more of Arizona’s legendary high school basketball products, coaches and players, over time.  It is our desire to link today’s high school players with Arizona’s best former players.  There are so many people that have helped to create today’s Arizona basketball community, and we look forward to developing a clear understanding of those that made it all possible.