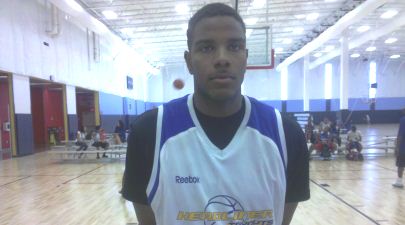 It seems like 6-foot-8, 265-pound graduated senior post Dalvin Brown has been on the high school basketball season forever for Arizona basketball enthusiasts.

Brown has been a member of the Arizona high school basketball scene for many years, although he is only 19 years of age.  Brown entered the high school Arizona high school varsity competition as a young prospect, but several school transfers including a one-year stint in the prep school ranks made him very experienced.

Brown had mulled over his college options for many months, giving some thought to prep school, while also trying to qualify for one of his many division-I offers, but after determining that he would still need some work to do in the classroom to be cleared as eligible by the NCAA, Brown has decided to take his game to the junior college ranks.

This week, after being recruited heavily by head coach Charles Harell and his basketball staff for many months, Brown signed a national letter of intent with Arizona Western Junior College in Yuma, AZ. - providing the Matadors with a larger post prospect for the 2012-2013 basketball season.  With so few bigger post prospects still available this late in the year, Brown was the best big available.

Brown had enrolled in classes this school year at North High School, after spending his freshman and sophomore years at Maryvale HS, and then spening his junior season (last year) at Arizona College Prep.  As a senior at North HS, Brown was not cleared to play athletically by the local Arizona Interscholastic Association (AIA).

Brown had his struggles academically early on during his high school career, and decided to attend a prep school last year in an effort to improve his academic performance. Instead, Brown felt like his academic progress was deteriorating, and he decided to move back into the high school ranks to finish up strong - looking to make up a lot of ground academically and make a push for qualifying.  Brown finished strong academically at a local charter school, and recently graduated last month - a nice honor for Brown who had his struggles early in his high school career.

Brown was also declared as an Individual Education Program (IEP) candidate while in high school.

Athletically, Brown is a nice looking power forward prospect with excellent experience already against strong competition. As a result, he plays much older than his age suggests and has very good poise as a player. He has a very good body for his size and does not mind physical contact. He is a very good finisher around the basket and uses his body to make plays inside the paint.  He is also capable of stepping outside to 15 feet and scoring the basketball, although he needs to become more consistent in his ability to make shots from the perimeter.

Brown also runs the floor very well, when he is in shape physically.  As he gets in shape in the junior college ranks, Brown will become a much better finisher and scorer in transition.  He rebounds the basketball hard on both ends of the floor and is a capable shotblocker.  Brown has a very good ceiling and still has some upside as a player.

Look for Brown to become a nice post prospect in the Arizona Community College Athletic Association (ACCAC) the next two seasons for Arizona Western JC.  If he can qualify academically after two years in the juco ranks, look for Brown to develop nicely into a mid-major plus division-I prospect, and maybe higher, with continued hard work.

Arizona Hoop Review Scouting Report: Brown has a very good sized body and a nice wingspan at 6-8, 265-pounds - a pure power forward prospect for the future.  He takes up a lot of space in the paint and uses his body very well to gain good inside position in the post.  Brown also runs the floor very well for his size and will be able to do so as he gets into much better physical shape.  He can often be seen working hard to get down to the offensive end after making an outlet pass to the guard. He has very good stamina and good feet when he is in shape.  He has improved a great deal offensively, and will only get much better over time with more skill development and work on his low post moves.  He possesses solid low post moves, a solid jump hook and does well facing the basket out to 18 feet.  He takes his time offensively before making any moves, which is a nice added feature to his game. Passes well out of the post.  Brown's best asset is his ability to rebound, which he does while keeping the ball up high over his head.  His big body allows for him to gain very good inside position - an excellent offensive rebounder.  A good looking and true power-forward post prospect.  A mid-major + prospect after junior college.