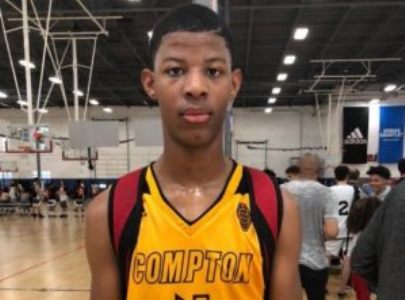 The NCAA's spring evaluation period was a good one for many of Arizona's top prospects, and one younger prospect that capitalized on the opportunity to maximize his exposure to college coaches this spring was Corona del Sol High School's 6-foot-4, 170-pound sophomore guard Dalen Terry, one of the state's elite young prospects.  After a sophomore season where he clearly emerged as one of the state's elite young talents, Terry had a strong spring performance for himself and now is one of the top rising upperclassman prospects in the West.

Terry elected to play this spring for the Compton Magic (CA) club program, and helped to lead their program's 16U squad to a strong spring performance.  As a result, Terry received numerous big offers for himself.

After receiving his first offer from Grand Canyon University before the high school season, Terry has now garnered big offers from such division-I schools as Cal, USC, Utah and UNLV, with many more schools looking to get involved this July, once college programs can begin contacting underclassman prospects.  Many more schools should look to get involved with Terry this summer, especially after a strong July performance for himself on the club circuit.

There has also been some talk regarding Terry's future at Corona Del Sol HS next fall, as he could be leaving the program to play for a prep school, where he would finish out his high school career.

Terry is among the state's top prospects in the 2020 class, and, while he is still very young, he is coming off a breakout sophomore season for the Aztecs.  Terry also earned a surprise Top 20 all-star performance in last summer's Southwest All-American Camp, amidst 120 of the top prospects in the state and West.

I will continue to follow his progress as a player closely, and bring you any other recruiting updates regarding Terry as he continues to mature physically and looks to have an even bigger summer performance for himself.

Arizona Hoop Review Scouting Report:  Terry is a long, rangy prospect with huge upside and a bright future ahead of him.  He has excellent length of body which allows him to make plays, but he will need to get much stronger over time and fill out to maximize his potential as a player.  He is fundamentally sound and has a nice overall skillset and feel for the game.  A bigger point guard prospect that loves to have the basketball in his hands and make plays for himself and others off the dribble.  An excellent passer of the basketball that sees the floor very well, and pushes the ball up the floor to the open man.  A very good slasher and finisher at this point in his young career.  Has a nice shooting stroke with range.  Has excellent overall versatility as a player.   Very good in the open floor.  An active defender.  Plays passing lanes.  Runs the floor well.  Has serious upside and potential for the future, with a high basketball IQ.  A budding young prospect that will receive loads of recruiting attention over time.