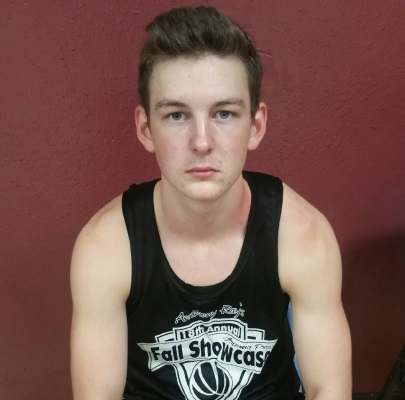 Chaparral High School's gifted guard prospect, 6-foot-2 senior point guard Colton Kresl is among the most talented performers in the state - regardless of class, and is now one of the top unsigned prospects in the 2017 class.  Kresl has been off to a terrific start to the high school basketball season - turning in career performances to start the high school basketball season.

On Tuesday evening, Kresl poured in his best performance of his young career in a nice win over Centennial High School.  In the win, Kresl exploded for 33 points and 5 assists - missing only (3) shots in the game.

Kresl's terrific showing was in front of University of Albany assistant coach Jerrad Knotts, who traveled all the way from upstate New York to catch a glimpse of Kresl.   He would not leave disappointed, as Kresl turned in an epic performance.

Last weekend, Kresl led his Chaparral group to a tournament title in this year's Paradise Valley Invitational - posting several big team wins in the event.  For his efforts, Kresl would earn Tournament Most Valuable Player honors.  Just before the start to the high school basketball season, Kresl was also recognized as this year's 2016 Arizona Preps Fall Showcase Tournament MVP as well.

A big-time scorer of the basketball, Kresl is coming off a strong showing this spring and summer.  Kresl has seen his college recruitment pick up as of late, and so things could get very interesting for the talented guard prospect.

Kresl has received one division-I scholarship offer from Northern Arizona University head coach Jack Murphy and his staff, and now he will look to gain much more recruiting interest in the spring, as the late signing period approaches.

Recently, Kresl has heard from such schools as New Mexico State, San Diego, Albany, Boston University and Sacramento State, with many more schools looking to get involved.

Kresl will be one of the better available guards in the West for the spring, as he is a very skilled guard prospect that loves to score the basketball at a high rate, and also makes players around him better.  He plays with a high level of confidence is proven - getting it done consistently against some of the best guards in the West.

Kresl is coming off a strong spring and summer performance, while leading his Arizona Powerhouse Black team to several strong finishes and a tournament championship runner-up performance in the spring in Vegas.  Kresl teamed up in the spring with Corona's Saben Lee (Vanderbilt commit) and Desert Vista's Noah Baumann (San Jose State commit) to give Powerhouse Hoops a formidable trio.

Look for Kresl to continue on his terrific pace throughout the remainder of this high school season - leading a very talented Chaparral High School team that will compete for a state title.