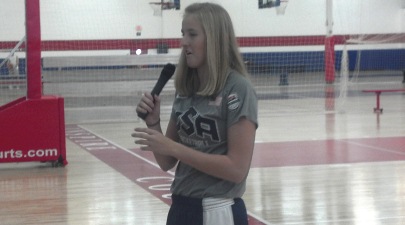 St. Mary's High School's 6-foot-1 junior guard/forward Courtney Ekmark, a recent commit to UCONN and a Top-10 ranked player nationally, adressed the participants in this year's Arizona Preps Fall Showcase in a manner that proved her maturity as a player and as a person.
Share
Facebook Twitter LinkedIn WhatsApp Pinterest Email

With several guest speakers on the day speaking to the players, parents and spectators, no one provided more value to this year's participants than St. Mary's High School's 6-foot-1 nationally ranked junior guard/forward Courtney Ekmark.

Ekmark's tremendous ability to discuss with the participants her experiences, while showing off an amazing and developed ability as a public speaker were extremely impressive - showcasing why she is currently regarded by ESPN as one of the top 10 players in America in the 2014 class.

Ekmark had an excellent sophomore season under her father, St. Mary’s head coach Curtis Ekmark.  The season was perfect for the Ekmark family and also the St. Mary’s basketball program, as the team finished with a perfect 30-0 season record – winning the state’s Division-I state championship for the second year in a row and also capping off a season where the Knights were the #1 ranked team in America.

Ekmark was selected as a member of our 2012 Arizona Preps All-Arizona Team after a superb sophomore season where she helped lead the ultra-talented Knights on the season, among the team leaders in scoring, assists and steals – even though the Knight’s program did not keep player statistics this season.

Ekmark was a major ingredient to last year’s undefeated, national and state champion St. Mary’s Knights.  Her ability to stretch the defense consistently, her tenacity on the floor, as well as her unselfish approach to the game made the Knights absolutely unbeatable last high school season.  As the youngest player on last year’s very dominant Knight’s team, Ekmark proved that she is well beyond her years as a player and as a person.

Look for Ekmark to continue to work hard and develop nicely over the next two years of high school, while keeping her Knights among the top teams in the country.  I couldn't be more impressed with this young lady's development as a player and as a person.  She will be successful in all facets of life.