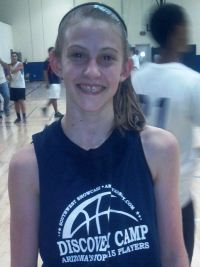 Corona Del Sol High School's 5-foot-6 freshman guard Taylor Kalmer is a big-time rising talent in the state of Arizona.  The ultra-talented 2015 prospect is fresh off a very strong freshman season for the Aztecs, and, recently, she was selected as this year's Tournament Most Valuable Player at the 2012 Southwest Showcase Main Event - a tournament organized by Ron Coleman.

In the event, Kalmer led her club program, The Magic, to the championship of the Gold Division after a 4-0 record in the event and a championship victory over the Arizona Venom.

Kalmer is coming off an excellent high school season as well, as she led her Aztecs to a 14-13 overall record on the high school season.  While only a freshman this season, Kalmer ranked second on her high school team this season in scoring - averaging 13.9 points, 2.5 rebounds, 2.3 assists and 1.7 steals per/game.

Kalmer is among the top-rated talents in Arizona's 2015 class, and has quickly become a superb talent among her class.  I caught my first glimpse of Kalmer last fall at a Freshman-Sophomore Showcase event organized by Ron Coleman and Arizona Varsity, and came away extremely impressed with Kalmer's unique ability to handle the basketball and make plays for herself off the dribble, and also make plays for others as well.  She is a very confident guard prospect that likes to have the basketball in her hands and is not afraid to take big shots.

Kalmer has worked very hard with personal trainer and club coach, Kitch Kitchen, on her basketball craft.  Kitchen has raved about her young prospect's ability to play the game to me, and believes that Kalmer is the next big thing in Arizona.

After such a strong championship performance in this year's Main Event, it seems that Kalmer is on a straight path to future stardom in the Arizona basketball ranks.