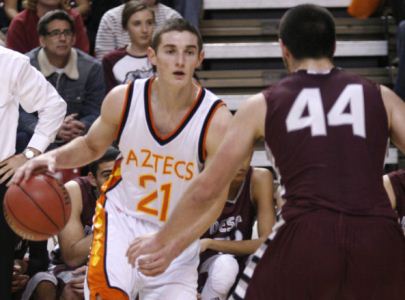 Now that the 2012-2013 high school basketball season has come to a close, many of the state’s best unsigned senior prospects will look toward’s their college recruitment this spring.  With many top-rated prospects still unsigned and available, college programs around the country will begin to start scouring the country and the state of Arizona for players.

One player that has really developed throughout his high school career and is coming off a big senior season was Corona Del Sol High School’s 6-foot-3, 185-pound senior shooting guard prospect Bryan Seifker.  While Seifker was not among the top individual scorers in the state this past season, his ability to score the basketball when needed and his pure athleticism and toughness as a player were enough to help his Corona Aztecs to their second consecutive Division-I state championship.

Seifker was a good contributor on the Aztecs' almost perfect 32-1 season a year ago, where his team ran through the state's top competition.  This season, with the Aztecs not being a favorite to defend their state title before the season, Seifker came up big all season long and was a major force down the stretch for Corona, as they won it all again - finishing with another impressive 29-4 overall record on the season.

Seiker plays with a high level of self-confidence in himself and his teammates, and made numerous big shots for head coach Sam Duane Jr. down the stretch for the Aztecs.  With opposing team defenses focusing on defending star 6-foot-3 junior point guard Casey Benson, Seifker was a calming force for his team as he stretched the defense consistently and showed glaring toughness as a player.  In this year's state final against Pinnacle High School, and with his team looking to come from behind late in the game, Seifker knocked down some big shots to help carry team his team to the come-from-behind victory.

Seifker is among the state's purest shooters of the basketball, as he is able to make shots with unlimited range on his shooting stroke.  His ability to stretch defenses this season, allowed for Benson to be more effective on the perimeter and 6-foot-4 sophomore post Cassius Peat to be more effective inside.  Seifker also plays with superior confidence, which allows him to take big shots at key moments in the game.  Seifker is also among the most athletic guards in the state, as he is able to play well above the rim and is a very good slasher and scorer in transition.

Seifker is also a good one-on-one defender and possesses good overall lateral quickness.  His pure athleticism as a player really benefits him as a player, as he is able to make plays on both ends of the floor and plays with an excellent motor.

Currently, Seifker is hearing from numerous smaller programs for his services, and his club coach and personal trainer, Justin Allen, advised me that Cal State Bakersfiled has expressed serious interest in the talented guard prospect.  Look for Seifker's recruitment to pick up more as the spring evaluation period progresses, as this young man is a winner and would be a great addition to any smaller program at the low to mid-major division-I level.

Arizona Preps will continue to follow the recruitment of Seifker closely, and bring you any updates as they continue to develop.