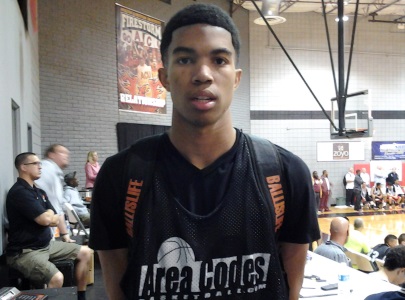 Lately, the state of Arizona's best basketball prospects have seen scholarship offers begin to pour in for numerous different student-athletes - suggesting basketball has definitely improved in the state.

One recipient is top-rated Corona Del Sol's 6-foot-3, 170-pound junior guard Tyrell Henderson.  Henderson recently received a scholarship offer and decided to jump on it, giving a verbal pledge to a rising program in the Big Sky Conference.

Recently, the Portland State basketball staff has shown their commitment to Arizona basketball prospects by extending scholarship offers to many prospects in the state.  Well, hook and sinker.  The program made an offer that Henderson couldn't refuse, as the skilled guard prospect accepted the offer and gave an early  verbal pledge to the Vikings program.

Henderson has had tremendous success at Corona Del Sol, as he has won three-consecutive Division-I state titles with the Aztecs, in his three seasons at the school, and will look to bring home the hat trick next season as a senior - a superb high school career for Henderson.

On a team this season that was ranked among the top-10 high school teams nationally and finished with a 33-1 overall record on the season, Henderson saw valuable minutes as the team's starting shooting guard.  While he did not put up impressive scoring numbers on a super loaded team of prospects, Henderson was a glue-guy of sorts for the Aztecs - providing solid defense, passing and giving then Corona head coach Sam Duane Jr. depth in the backcourt.  The Aztecs did not go deep into their bench all season, so Henderson received loads of experience and quality support for his team.

Tyrell has played each spring and summer for his club program, the Arizona Power, and this club season he has played for the Arizona Power Black 17U team, which also features top-rated prospects, Mitch Lightfoot and Cameron Satterwhite (University of Colorado commit).

Congratulations to Tyrell and his family on this amazing accomplishment from our staff here at Arizona Preps.

Arizona Hoop Review Scouting Report:  Henderson is a valuable performer for any team he plays for, as he is a good verbal leader and competes hard at all times without attitude.  He has a great attitude on and off the floor.  A high-energy guard prospet that comes to play every night.  He is a very good ball handler and passer that is capable of playing both guard positions on the floor - a fundamentally sound prospect.  Not a big scorer, but he makes shots from the perimeter when left open and is capable of creating his own shot when he decides to be an offensive threat.  A good athlete with some pop to him.  A good slasher and finisher and converts well in the open floor.  An excellent defender that could become a lock-down defender at the collegiate level.  Looks to find the open man on the floor and makes basketball plays.  A good, solid prospect for a low-major program.  A winner.