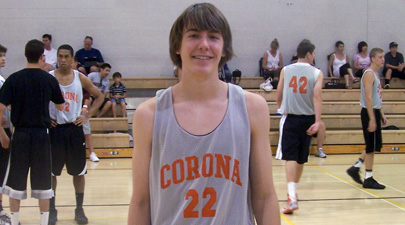 Everyone had anticipated to an eventual meeting between the state's top two teams in this year's Division-I state championship game - #1 seed Corona Del Sol and #2 seed Pinnacle HS.

While #1 seed Corona Del Sol (32-1) would get there as anticipated, no one had expected #6 seed Cesar Chavez to get there. Just like in years past, Chavez had utilized an athletic, fast-breaking style of play to find their way into this year's championship game.

Chavez (27-6) had defeated #2 seed Pinnacle HS 62-58 in overtime in this year's Division-I semi-finals at Jobing.com Arena on Thursday evening.

Corona would jump out to an early 11-7 first quarter lead with 4 minutes remainning in the period, after a long three-pointer in the secondary break from 6-foot-3 senior combo-guard Calaen Robinson (Arizona State signee). Robinson would score 7 of his team's first 11 points.

Corona would take a 16-11 lead into the second period, after a nice assist from Robinson to 6-foot-2 sophomore point guard Casey Benson for a three-pointer just before the buzzer.

With 7:21 left to play in the first half, Chavez talented 6-foot-5 sophomore post Pablo Rivas would earn his second foul of the game - heading to the bench. 6-foot-7 senior post LJ Harmon would enter the game for Chavez.

Corona would beat up Corona on the glass in the second period, and jump out to a 22-15 lead with 3:43 left to play in the first half.

A basket inside by Peat and then a wild offensive put-back from Moss would give Corona their biggest margin of the game - 28-17. Then Casey Benson would get into the act, driving to the basket and scoring on a floater after being fouled. Benson's free throw, a three-point play, would give Corona an impressive 31-17 lead with a little over a minute to play in the first half.

Another three-pointer from Benson just before the half, and Corona would take a 34-20 lead at halftime.

Chavez would begin the second half only converting 1 of their last 12 field goals. With Chavez on a cold streak and lacking any momentum, Corona would increase their lead to 18 points, 40-22 with just under 5 minutes left to play in the third period.

High-scoring 6-foot senior combo-guard JD Reagan would get hot for Chavez late in the third period, after a shooting slump in the first half.

With Reagan trying to get his team back in the game, another three-pointer from Benson and a sweeping transition layup from Calaen Robinson would nullify his effort. Corona would lead 52-33 after three quarters.

Corona would not look back in the game. While Chavez would fight - outscoring Corona 20-14 in the final period, the lead would loom too large as the Aztecs would win this year's Division-I state championship after a 66-53 victory.

"This is the best team to come through Corona," said a delighted head coach Sam Duane Jr. after the game.