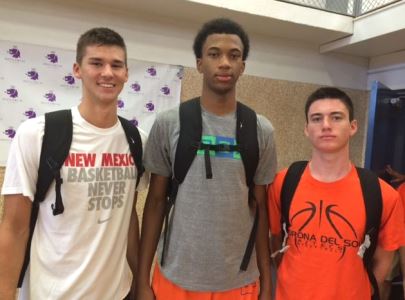 After witnessing the best girls high school crowd I have ever seen at a girls game in the state of Arizona last week, I was not prepared on Tuesday evening for what I would find at Corona Del Sol High School.  The home of the three-time defending state champion Aztecs was an absolute mad house as Corona Del Sol fans and Desert Vista fans completely filled the gymnasium to capacity.

Fans were halted by security and Corona's staff 30 minutes before the game even began - as no more spectators were permitted to enter the gymnasium - something I have never seen in an Arizona high school basketball game, well atleast not for almost 20 years.  While fans were there to support both of their teams, make no mistake about it - fans were there to see the three-headed monster of Corona, led by superstar 6-foot-10 freshman post Marvin Bagley Jr.

Bagley has electrified the state of Arizona in a short period of time, and definitely this high school season.  We are now in the era of Marvin Bagley in the state of Arizona and the state has not been ready for it.  The excitement that Bagley has brought to Arizona basketball this season is something that we have never seen by a player so young, and have not witnessed since Jerryd Bayless, Mike Bibby or Richard Jefferson graced the Arizona hardwood.

Corona Del Sol has the best basketball fans in the state, and rightfully so - they also have the best team in the state.  The trio of star sophomore guard Alex Barcello, 6-foot-6 senior forward Dane Kuiper (New Mexico signee) and Bagley is unstoppable in the state of Arizona, and the best trio of players since Deer Valley HS or Mesa Mountain View HS in 2006.  Corona Del Sol (21-1) has not lost a game in Arizona this season, and, most likely, they will not.

The best match-up for the Aztecs all season long, and maybe the best team they will face this season is Desert Vista HS (20-2).  The Thunder came into Tuesday's match-up with the defending champs with only one loss on the season, and looking to spoil the evening for Corona.  Desert Vista is loaded with athletic talent and actually matches up well with Corona.

The one match-up problem for Desert Vista was, of course, Bagley - someone everyone has a match-up problem with.  But Desert Vista would hold bagley to maybe his worst offensive performance of the season.  But what Bagley did not do on offense, he made up for it on the defensive end - making it very difficult for the Thunder to convert baskets inside the paint.  Bagley grabbed rebounds and ignited the Aztecs fast-break.  And when the fast-break began with Bagley snatching a rebound high off the glass, it often ended with Barcello on the other end.

Barcello was an absolute beast on Tuesday evening, as he led his team to a big 71-57 home win by scoring a game-high 31 points.  With Desert Vista hanging close to Corona late in the game and getting the Aztec lead down to four points, Barcello would take over the game in the fourth period for his team - leading his team to victory.

The Corona home crowd was the largest, loudest and most organized high school crowd I have ever seen in Arizona.  The home crowd was a major advantage for the Aztecs who would use the excitment of the crowd to hold off a Desert Vista team that they very well may face again en route to another high school state title.