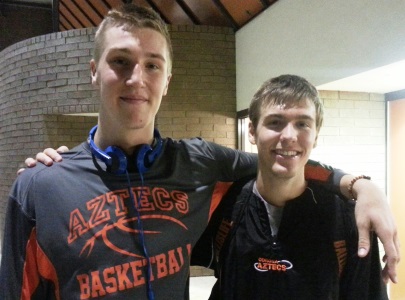 Shadow Mountain High School (7-1) has been terrific this high school season.  Sporting a very talented lineup that is very young, Shadow Mountain is the team of the future in the state.  On Saturday evening, in this year's Hoophall West High School Invitational at Grand Canyon University, Shadow would face the team of the present - two-time defending Division-I state champion Corona Del Sol (7-0).

Corona is as talented a team as there is in the state this season, led by the play of the state's premier point guard, 6-foot-3 senior guard Casey Benson (University of Oregon signee), 6-foot-9 senior post Connor MacDougall (Arizona State signee) and 6-foot-6 junior forward Dane Kuiper (University of New Mexico commit), the Aztecs are a veteran ball-club filled with talent, depth and experience.  While these three top-rated prospects lead the team, Corona has numerous other players that would be premier players for other programs.  On Saturday evening in front of a nice crowd of fans, scouts and media at this year's Hoophall West event, Corona would increase their undefeated record to 7-0 - defeating a loaded but young Shadow Mountain team, 84-75.

Corona would get nice support from a cast of players in this game, as 6-foot-4 senior guard Russ Davis would turn in his best shooting performance of the season.  Two consecutive three-pointers in the first period from Davis and another three-pointer from Casey Benson would allow Corona to take a 21-17 lead after the first period.

Sharp-shooting 6-foot-2 sophomore point guard Michael Bibby Jr.  would keep Shadow in the game early with some nice three-point shooting of his own.  Bibby would show a no-conscience attitude on the court early in the game, while his father, Arizona legend and NBA guard Mike Bibby, would coach the team from the sidelines.  Bibby is listed as the program's assistant coach, but he looks much more like the head coach, as veteran head coach Jerry Conner sits on the bench and Bibby coaches the team.

With the game close, Russ Davis would connect on another three-pointer late in the period to put Corona ahead 26-24.  Corona would then jump out to a 35-28 lead after two consecutive jump-hooks from Connor MacDougall.

Ultra-talented junior forward Dane Kuiper would then put his stamp on the game with consecutive three-pointers late in the half.  Corona would take a 43-35 lead in to halftime.

Corona would see their lead increase to 14 points, 65-51, in the third period after a transition basket by Kuiper.

Corona's MacDougall would injure his shoulder in the third period, causing him to sit out the remainder of the game.

In the fourth period, Shadow Mountain would go on a 9 to 3 run to start the period.  Corona would fight to maintain their lead, but after another three-pointer from Bibby, the score would read 70-64 in Corona's favor with 2:22 left to play.  A three-pointer from 6-foot-4 sophomore guard/forward JJ Rhymes with 1:59 left to play would make the score 72-67, Corona.

Michael Bibby scored a game-high 24 points, including five 3-pointers.  6-foot-5 sophomore forward Carlos Johnson scored 23 points of his own, including (3) three-pointers in the loss.