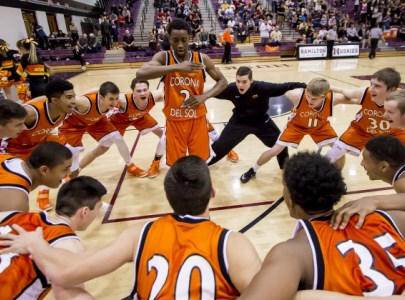 The state has never seen anything like Corona Del Sol High School's 6-foot-11 freshman post Marvin Bagley, but most basketball enthusiasts in the state have also never seen anything like the Corona Del Sol basketball program.  Corona (32-1) has won the last 3-consecutive Division-I state titles in the state, and has also won an eye-popping 69 consecutive games against Arizona high school programs.

The tremendous Corona Del Sol dynasty began during the 2011-2012 high school basketball season when the Aztecs won the first of their three state titles.  Since that season, Corona del Sol's record is 127-7.  Many of Corona's losses have come against out-of-state opponents.  Corona has flat out destroyed Arizona competition, and on Saturday evening they came one step closer to proving just how dominant they are.

In front of a large stadium of fans at Grand Canyon University, Corona overcame a strong effort from Chaparral High School (26-6), and an early first quarter lead to defeat Chaparral 79-70 in the Division-I state semi-finals.

Chaparral did all they could Saturday night to end Corona's dynasty, as they built a five-point lead in the first period, 23-18, behind strong play from terrific sophomore guard Colten Kresl.  Kresl is one of the state's top sophomore guard prospects, and one prospect that loves to perform under the bright lights.  He proved just how much on Saturday evening, as he would connect on (3) consecutive three-pointers in the first period.

Grand Canyon University signee Kenzo Nudo would also come up big for Chaparral in the first quarter.  Nudo will play in the same gymnasium for the Antelopes next fall, and he looked very comfortable there.  Nudo made (4) three-pointers in the game's first half.

Chaparral would cool off in the second half though amidst good defensive pressure from the Aztecs, and Bagley would ignite.  The imposing post presence dominated inside the paint for his team, and led Corona to a huge 15 to 3 run late in the game.  Bagley finished four different impressive dunks in the second half.  Bagley is also extremely versatile, and his three-pointer with 2 minutes left to play in the contest gave Corona their biggest lead of the game - a 51-41 lead.

Corona will face a talented Desert Vista team in the Division-I state final on Monday at 8PM at Gila River Arena - looking to become the state of Arizona's first high school program since Phoenix Union (1958-61) to win four consecutive state championships in the state's top class or division.