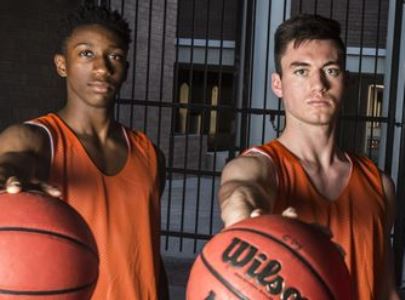 Corona Del Sol and Basha High School will meet in the state's 6A championship game on Tuesday evening at Grand Canyon University Arena, after both teams won their tough semi-final match-ups on Thursday evening at Gila River Arena.

Basha (29-1) would get off to a good start in a defensive match-up that would create a slow contest - just what Basha head coach Mike Grothaus had planned for.  Basha would get off to a quick start, while Desert Vista would not, as they would struggle with Basha's 3-2 zone defense.  Desert Vista would also play the game at Basha's pace, allowing Basha to get good shots in their offense.

Desert Vista though would get back into the game in the second period.

The game would remain relatively close until 5:10 left to play in the fourth period when 6-foot-6 senior forward Gabe McGlothan (Army signee) would finish a strong two-handed alley-oop dunk, then convert another strong layup inside to put Basha ahead 38-29.

After a dunk by 6-foot-5 junior forward Wesley Harris with 1:50 left in the game, Desert Vista would get to within three points of Basha, 38-35.  But McGlothan would finish another strong two-handed dunk in the paint to give Basha a 40-35 lead late, with :50 seconds left to play.

Desert Vista would get back to within three points again, after a transition layup from Isaiah Wilson, 40-37, but two free-throws from senior guard Terrell Brown would ice the victory for Basha, and they would go on to win the contest, 43-38.

Basha will now look to to finish off their terrific high school season with a 6A state title, but they will have to slow down the state's best backcourt at Corona Del Sol.

Last season, Corona lost to Sunnyslope in the state quarter-finals, after Saben Lee would miss the game, after not being allowed to play after being sick earlier in the day and missing school.  This season would not be a repeat performance, as Lee more than made up for last season - scoring a game-high 39 points in his team's big 85-66 win over #4 seed Cesar Chavez.

In the first quarter, both teams would feel each other out.  The two teams would almost end the period tied, until a three-pointer by junior guard Mike Rogers just before the buzzer would give Chavez a 20-17 advantage.

Saben Lee would finish the first period with 11 points, while Barcello would struggle to get it going early - finishing the period with a mere 2 points, but running the show for his team and getting teammates involved.

Both teams would match one another consistently in the first half, as Corona would outscore Chavez 20 to 15 in the period, and take a 37-35 lead into the half.

Saben Lee though would take over the game in the second half, getting to the free-throw line quite often and converting 19 of 20 free throws.

Barcello would score nine points during a 3-minute stretch in the third period - giving Corona a 6-point lead.  Barcello would finish the game with 20 points and 5 assists.

Chavez would fail to keep pace with Corona in the game's second half, as the Aztecs would outscore Chavez 48 to 31 in the two quarters.

Corona would cruise to a nice victory in front of a much smaller crowd at Gila River Arena than year's past.

Mike Rogers would lead Chavez with a team-high 19 points and 8 rebounds, while Kaleb Martin would add 17 points in the loss.