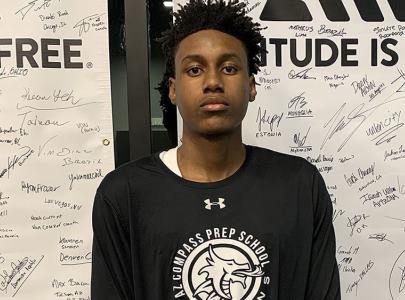 The Grind Session is widely known for producing top match-ups between prep programs, and this weekend's Latitude Longitude Classic @ St. Mary's High School did just that, as the event featured an exciting contest between AZ Compass Prep and Dream City Christian, a game and a match-up between two of the state's elite prep programs, and a game that has not happened to date, until this past weekend.

The fact that the Grind Sesssion was able to make this game happen between program organizers meant a great deal to scouts like myself, who simply want to see the best play against the best. Nothing more than that. The game isn't about which program is better, or who has better players. These two programs are both absolutely loaded with talent - more talent than this state has ever seen. In fact, Dream City Christian came into Saturday evening's contest actually without the services of one of their very best players and prospects, 6-foot-8 junior forward Arthur Kaluma - one of the better prospects in the West.

The goal is absolutely to provide competition for these top programs, especially when these programs are absoluteled loaded with players, and it is difficult to find quality competition, without traveling and spending loads of money in expenses. If these programs can save money and compete against other programs locally, it makes valuable sense. Unfortunately, there are only so many teams that they can compete against, as there are currently (4) elite prep programs in the valley, but being able to create games between them is very difficult. The Grind Session has been a forum for this to happen, and this weekend I had my popcorn ready.

AZ Compass and Dream City would not disappoint, as both programs would compete hard, with the players competing at a high level and also the coaching staffs fully engaged in the game.

Dream City Christian's sharp-shooting 6-foot-3 senior guard Brandyn Talbot has been playing very well of late, and he could catch fire in the game's first half - knocking down numerous shots for his team to help them build an early lead in the contest. But after a three-pointer from the top of the key by Compass' 6-foot-8 senior wing Jabari Walker, late in the half, Dream City would take a 40-33 lead into the half.

AZ Compass would finally tie the contest in the second half with 6:44 left to play, after a basket inside by gifted junior guard Frankie Collins - tieing the score at 54 all. With 5:28 left to play, talented and newly acquired junior guard Ty Ty Washington would pump in a three-poiinter in transition to give Compass their first lead, 57-56.

Dream City would fight back behind the terrific play of 6-foot-8 do-it-all senior wing Marjon Beauchamp. Beauchamp's overall play would help Dream City back to a nice lead in the contest, 66-59, but AZ Compass would again storm back behind strong overall play from Ty Ty Washington and Jabari Walker. A three-point play converted by Walker and then a three-pointer from the corner by Walker with :33 seconds left to play would give AZ Compass a 68-66 lead late.

Beauchamp would not be denied though, and a nice layup inside by him would tie the game and send it into overtime, 68-68.

In overtime, a three-pointer by senior guard Sincere Parker, a cutting dunk in traffic by Jabari Walker and another driving layup by Sincere Parker would help AZ Compass win the contest in overtime, 78-71.