Commitment, Dedication and a Character 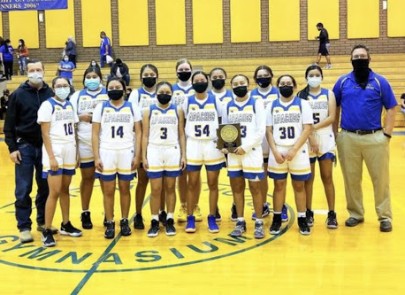 There’s a small school just off of the highway, as you drive through Ft Thomas in Southeastern Arizona.  If you blink, you may just miss it, such as many small schools around the state.  If you are fortunate enough to get into their gym and meet Coach Lee Haws, you’ll immediately realize why he’s such a perfect fit to run the school's sports program as the Athletic Director and the Head Coach of the Ladies' basketball team.

I first met Coach Haws when he brought his team up to our summer tournament.  He greeted me with a smile and a handshake.  Lee had a pretty tough team that year, and most of the teams in the tournament were rebuilding, and, or just not quite on their level, so they won most games pretty handily.  One game, they were up big and Lee leaned over and asked me “Hey coach, what’s the chances of us getting in that pool I saw outside?”

Most of the kids on his team hadn’t ever even been in a pool, so I was glad to help make that happen.  Several of our players commented about a conversation they’d had with Coach Haws, and just went on to say that he was a cool coach in general, aside from the "butt-whoopin" his team gave ours.

I asked Coach Haws a few questions and here’s what he had to say . . .

Could you give me some details on your years of experience as a coach ?

We have been to the Semi-Finals (4) times, Championship twice, one State Championship," said Coach Haws. "I take a little pride that we make it to the 2nd round every year (except lost once). I’m not big on personal awards.

Your Mission/Goals as a coach?

My main goal every year is to help kids understand that they can achieve so much more than they realize - if they will work hard, push through fatigue/adversity, to be dependable and reliable, and to trust others.  Developing relationships is most important, and helping kids understand that they need to work on these relationships and expect to grow.

The GPA of a Few Players

My second goal is to compete for a state championship every year. We don’t rebuild, we reload!  Kids need to step into different roles and be ready to step up.

What key factors do you have with this current team and their success?

Our freshman PG is going to bring all the moving parts together.  She is very skilled and has an attitude to compete and do whatever it takes to win.  She is very laser focused and doesn’t do anything that may cause someone to feel left out.  She celebrates with others and is the ultimate teammate!

Standout players? Potential to play at the next level?

#15 Jasmine Olivar – Fr, PG, A great basketball player, but, more importantly, she is a great person and awesome teammate.  (Region Off. POY)

#44 Kyia Haws – Senior post. A force down low and will battle for rebounds and has the capabilities to take you to the hole & rip the ball away. (Region 1st Team)

#23 Chasinee Stanley – Junior, G/Wing, is great in the open court. She has a lethal jump shot.  Never gets tired or frustrated of playing the game. She will do whatever you ask of her.  (Region 1st Team)

#25 Hailey Hinton – Junior, Wing, has the ability to knock down deep shots.  She will battle for rebounds and seems to just get a lot of loose balls.  (Region 2nd Team).

We can compete and beat anyone with many different approaches to the game.  We can go up-tempo (which we prefer), or slow it down and play a half-court game.  The traits are just to compete and be dogs, and do whatever it takes to help each other be successful and play very unselfishly!

How do you feel about this season?  Are your kids playing to their full potential or do you see them continuing to get tougher and tougher?

The season, despite the ups and down due to COVID, has been a successful one. Not just because we won the championship, but because of the desire to keep the eye on the prize. The girls have been laser-focused on competing to learn from each other.  This team was a hard one to stop as an opponent. We had three different scorers that could go off any given game.  There were about (5) other girls on the team that could hit any outside shots, if you took away any of the other primary scorers.

How is the team chemistry?

This is an extremely fun year…the girls are working hard and accepting their roles and helping each other every day to get better.  “COMPETE” was our motto at the beginning of the year.  By the end of the year, we were telling the girls, and, for the most part, they were living it. "Accept the challenge and rise to the occasion!” This year’s team never had any drama and were at practice being dependable. We knew we were talented, but just needed to come together…the girls all did it, and they worked every day for each other.

Just two summers ago, the board wasn’t going to bring Coach Haws back. Sources around were claiming they felt that he hadn’t won the “gold ball” and questioned his abilities.  When I heard of the idea of not bringing Haws back, I was pretty mind-blown, and I certainly wasn’t the only one.  They came to their senses, kept Haws on board and the program kept going.

A solid transfer, freshman Jasmine Oliver, really ignited the team that he already had been working with and they won the championship.  There is no question that Coach Lee Haws is an absolute asset to the community that goes through Ft Thomas, and that is being modest.  He’s likely going to be a top contender for as many years, as he stays at Ft Thomas, and I have no doubt that he’s a front runner to add some more gold to the trophy case before he hangs it up.