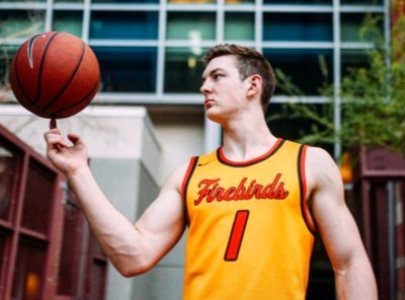 It was a long time coming for Chaparral High School's gifted guard prospect, 6-foot-1 senior point guard Colton Kresl.  After mulling over his recruiting options for some time, Kresl has decided on a college home for himself - signing a national letter of intent with Cal State Dominguez Hills University.

Among the most talented performers in the state, Kresl saw many other prospects in Arizona's 2017 class receive scholarship offers.  While he received loads of college interest, many division-I college programs were reluctant to give him an offer.

UNLV, Texas Tech and New Mexico State each expressed interest in having Kresl as a preferred walk-on to their program, but Kresl knew he was worthy of a college basketball scholarship.  He now has one and it is well deserved.

A big-time shooter of the basketball, Kresl had an excellent senior season - leading his Chaparral team to a 5A state semi-final finish.  Kresl is a very skilled guard prospect that loves to shoot and score the basketball at a high rate, and also makes players around him better.  He plays with a high level of confidence and loves the game.

Kresl also had a strong spring and summer performance last year (2016), leading his Arizona Powerhouse Black team to several strong finishes and a tournament championship runner-up performance in the spring in Vegas.  Kresl teamed up in the spring with Corona's Saben Lee (Vanderbilt signee) and Desert Vista's Noah Baumann (San Jose State signee) to give Powerhouse Hoops a formidable trio.

Kresl is an absolute steal at the division-II level, and should have a terrific college career for himself.

Congratulations to Colten and his mother Julie on this amazing accomplishment.  Well deserved.