Colin Carey Soaring Under The Radar 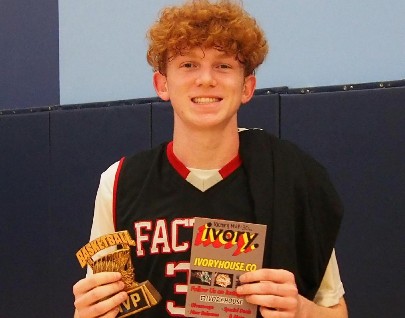 Arizona's 2021 Class of prospects, like other classes now in the state, is a very talented class of prospects - filled with many college prospects for the future that have already seen loads of college recruitment. One of the elite overall prospects in the class is soaring well below the recruiting radar though, as Sunrise Mountain High School's 6-foot-6, 200-pound rising senior wing prospect Colin Carey has really developed into a high-level talent that many college coaches are currently missing the boat on. The sharp-shooting bigger wing prospect has really come into his own as of late, and is one prospect in the class that deserves much higher college recruitment, immediately.

While many prospects in the state have seen their college recruitment begin to soar, as of late, through competing in numerous exposure events throughout the month of June in the state of Arizona, Carey, on the other hand, was not in participation. While many prospects were playing as individuals in these events, Carey was competing locally with his club program - leading his team to several local tournament championships.

Carey plays for legendary Arizona club coach Kenny Mullins and his program, The Factory. The Factory, formerly known as the Arizona Magic, has produced loads of division-I prospects over the years, and Carey is another elite prospect from the tradition. While Mullins recently has been widely known for producing quality talent for high-level college programs around the country, Carey is another prospect that college coaches need to observe, as he has developed over the past several years into a sure-fire, can't miss Division-I prospect from the West Valley.

Carey has been making a strong case for himself though for several years. After a good sophomore season, Carey turned it up big time as a junior. Last spring (2019), Carey led the Arizona Club Basketball League (ACBL) in scoring and became one of the state's next elite young prospects. As a junior this past high school season, Carey poured in excellent numbers - averaging a team-high 17.1 points and 7 rebounds per/game. As a senior, Carey is on pace to rank among the top individual producers in the West, and could, when the high school season does take place, if it does, lead the state of Arizona in scoring this season.

Currently, Carey has only one scholarship offer to his credit from Northern Arizona University. A mystery to me, Carey is well deserving of many, many more scholarship offers for his endeavors. Carey is knocking on the door of being a high-major prospect, so the reason why he has not generated more scholarship offers at this time is uncertain. As a result of not having an opportunity to compete during the NCAA Spring Evaluation Period (2020), due to the growing COVID-19 pandemic, Carey missed out a great deal on being evaluated by the many college programs across the country. Either way though, this young man's performance to date in high school basketball and previously on the club circuit, is worthy of serious Division-I interest and looks.

And Carey looks the part and fits the bill, as he is a bigger wing prospect with a a nice shooting stroke with unlimited range on his shot and an excellent overall feel and knack for scoring the basketball. He has a gift for scoring the basketball and a scorer's mentality - looking to make plays for himself and others when he gets the basketball in his hands. He also likes to makes plays for others off the dribble, and has he continues to mature physically and mentally, he will develop as a playmaker over time.

I will continue to follow Carey's performance and college recruitment throughout the remainder of the summer, and if there is an NCAA Evaluation Period in late August and September, as proposed by the NCAA, this young man is one prospect to mark on your list of players to watch closely.

Arizona Hoop Review Scouting Report: Carey is an elite scoring talent that has very good size and a good overall skill level as a 2/3 prospect. He is a very good shooter with excellent range on his shot and an ability to score from anywhere on the floor.  He can score inside and out as a result of his competitive spirit and desire to create scoring opportunities for himself.  A proven scorer of the basketball that will become a much better facilitator over time for his teammates, as he matures.  A good scorer in the post and from mid-range also, as he has a soft touch around the basket.  Does not mind physical contact and has good toughness.  A good ball handler and passer.  Fundamentally sound.  A solid defender.  A good finisher in the lane.  A strong rebounder and finisher.  Has a bright future ahead of him, and has become one of the state's top overall prospects.