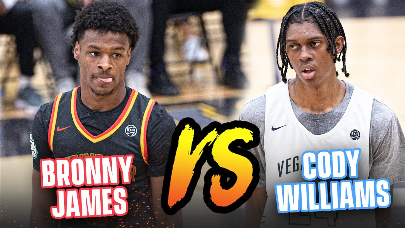 Perry High School's terrific 6-foot-8 rising senior guard Cody Williams is coming off a tremendous spring and summer performance for himself, as he has become one of the hottest prospects in America, and a Top 25 national prospect by many national publications and scouting services. Williams played this summer for Vegas Elite (NV) on the EYBL Nike Circuit, and is fresh off a strong performance in the Nike EYBL Peach Jam, where he faced up with Nike's Strive For Greatness program, which featured Lebron James' son Bronny James of Sierra Canyon High School (CA). Also a top-rated national prospect, James and Williams would go at it in the event in front of a large crowd of Division-I college coaches and spectators.

Williams would lead his program, Vegas Elite, to a big victory over Bronny James and his Strive For Greatness program. Williams would finish with a game-high 23 points and 10 rebounds in the victory, and continue the legacy being built for the Williams family this summer, after older brother Jalen Williams was drafted as the #12 pick by the Oklahoma City Thunder (NBA), and is looking to have a healthy NBA career for himself.