Cody Williams Rising To The Top 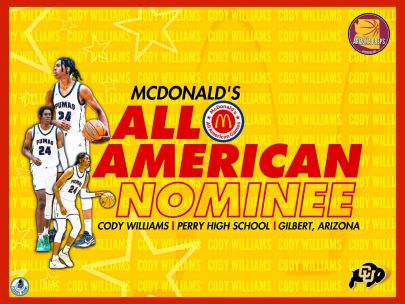 While Williams is receiving serious national attention with national basketball scouts and media, he is also receiving loads of national attention now from NBA scouts as well. Recently, an NBA Mock Draft report through NBADraft.net showed Williams as #1 overall pick to the Houston Rockets in the 2024 NBA Draft - a huge honor for Williams. While these NBA Draft reports are hypothetical, a projection as the #1 overall pick for a future NBA Draft is a tremendous honor for a high school prospect such as Cody Williams that plays in Arizona for his high school basketball. While Arizona high school basketball is on the rise in the state, Williams receiving such national acclaim proves his value with the top basketball scouts in the business, nationally and internationally.

Recently, nominations for the 2023 McDonald's All-American Game were selected by the McDonald's selection committee, and, of course, Williams was selected as one of the nominees. Among the numerous nominees selected from the state of Arizona, Cody Williams and AZ Compass Prep's talented 6-foot-6 senior wing Mookie Cook should both certainly receive official spots for the West for the 2023 McDonald's All-American game - giving the state of Arizona two different members on the McDonald's All-American team, which is something that has never happened before in our state. This national honor certainly becomes an immediate segue to future NBA Drafts. Williams is already projected by NBA Draft.net as the #1 overall pick, while Cook is currently projected as the future #12 overall pick by the website.

Williams currently is having an excellent senior season, while leading #1 ranked Perry High School (18-1) this high school season, as he and his Perry teammates have rolled through much of their competition this high school season, and are the clear favorites to win this year's 6A State Championship. Perry also is currently rated among the Top 25 overall programs in America by Max Preps, although a loss to Pinnacle High School pushed them out of a previous Top 20 national ranking.

It has been an excellent year for the Williams' family, as Cody's older brother Jalen Williams (Oklahoma City Thunder-NBA) was selected as the #12 pick in the NBA Draft in June (2022), and is currently playing major minutes for the Oklahoma City Thunder in the NBA. Cody is much more highly touted out of high school than his brother Jalen was, but he is on the same trajectory as his older brother. The future looks extremely bright for Cody Williams and the Williams' family.

Arizona Hoop Review Scouting Report: Williams is a very crafty and smooth offensive threat that has a nice overall skill level. He has really grown physically over the past several years, and is still growing into his rather long frame. Williams is as versatile a prospect as there is in the country, as a result of his extreme length of body and versatile skill-set. He can play as a very big point guard or play off the ball as a primary scorer. Williams is still learning how to take over games offensively, as he is so unselfish as a player, but he is coming into his own for sure. He also has a good shooting stroke with nice range, and can score from the stand-still position or on the move. He has a variety of floaters in his bag when he gets in the lane, and has a knack for scoring over bigger defenders already. He is a strong finisher in the lane and over defenders, when he makes up his mind to finish strong at the rim. He can also pass the basketball with either hand and simply makes the game look easy. Williams is also a slick defender that plays passing lanes and makes it difficult for opposing guards to get off, as he has excellent length and is able to play passing lanes quite well. An excellent prospect with tremendous upside and room for growth as a player, with a very high ceiling.