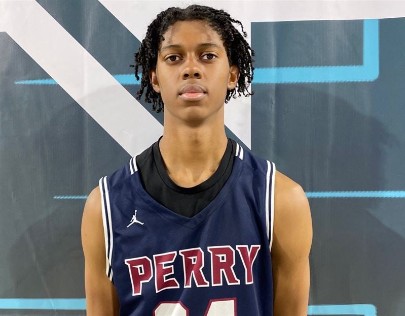 (Picture courtesy of 247 Sports) One of the hottest overall prospects from last weekend's amazing Section 7 Event held at State Farm Arena in Glendale, Arizona, was Perry High School's gifted and promising 6-foot-8 rising junior wing Cody Williams. While for many college coaches in attendance, it was the first time they had seen Williams' glaring upside as a college prospect, it only validated what we have known here @ Arizona Preps for some time. Williams is a serious target in America's 2023 Class.

Perry was one of the most sought after programs competing in the Section 7 Event last weekend, as their team features (3) of the top overall prospects in the event - Dylan Anderson (University of Arizona commit), Cody Williams (top-rated 2023 prospect) and Koa Peat (top-rated 2025 prospect). With Anderson already committed to the Wildcats, Williams and and Peat took center stage with college coaches. While the young stud Peat would garner numerous offers as a mere incoming freshman prospect, Williams would also receive numerous offers and exposure for himself as well.

As a mere 2023 prospect, Cody Williams is a top-rated target for college programs early in the recruiting process, and it is just the beginning of his recruiting process. Look for many more Division-I college programs to get involved with Williams over time, and it will be soon. This weekend, when Williams and Perry High School compete at the Second Session of the Section 7 Event, in a much more intimate setting at Brophy Prep. I expect this young man to be one of the hottest prospects at this weekend's event, and with a large number of college coaches in attendance for the games, Williams should see a another dramatic rise in his recruitment.

Williams is a very crafty and smooth offensive threat that has a nice overall skill level. Not that he is a dominant offensive weapon yet, but he will be over time, as he continues to mature physically. Rather, it is the manner in which he is able to score, as the game comes very easy to him. He has a superb handle of the basketball and an excellent feel for the game, which is common for a young prospect brought up in such an amazing basketball family. He is also has a good shooting stroke with nice range, and can score from the stand-still position or on the move. He has a variety of floaters in his bag when he gets in the lane, and has a knack for scoring over bigger defenders already. He can also pass the basketball with either hand and simply makes the game look easy.

Williams is also a slick defender that plays passing lanes and makes it difficult for opposing guards to get off, as he has excellent length and is able to play passing lanes quite well. He could develop into a lock-down defender over time, and with continued focus and hard work. Williams has grown physically so much over the past year, that he is still trying to catch up with his consistent growth spurts. He has grown so much that he is almost awkward right now a little bit, but as he catches up to his serious growth, then he will realize much more of his tremendous potential. His growth plates are still wide open, I have been told, so this young man could grow to be 6-9 or even 6-10, by the time he finishes growing.

I look forward to watching Williams continue to grow physically and take his game and recruitment to another level. I will continue to also bring you any recruiting updates, as they continue to develop.