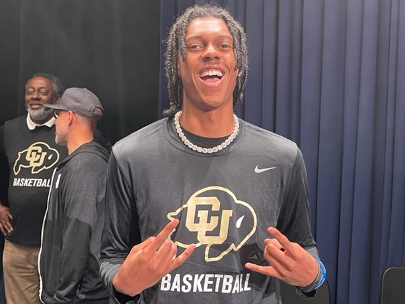 It is official, as Perry High School's star 6-foot-8 senior guard Cody Williams gave a BIG verbal commitment today at Perry High in front of a large crowd of students, fans and media in attendance. With some major excitement in the air in the program's auditorium this morning, Williams finally grabbed the microphone after the school's other college signees were honored and spoke. After an excellent speech of thanks, Williams did like so many other top-rated basketball prospects before him, and announced his college decision for the University of Colorado Buffaloes and Head Coach Tad Boyle and his staff.

"It felt like a big weight was lifted off my shoulder," said Williams. "I fell in love with Colorado, so I know it was definitely the right decision for me."

Williams had a lengthy and rigorous recruiting process, as he took his time and took as many of his official and unofficial recruiting visits during his recruitment. With (31) different offers to his credit, Williams trimmed his recruiting list over the past couple months down to (8) schools - Arizona, USC, UCLA, LSU, Georgia Tech, Colorado, LMU and Santa Clara, a very nice list of college programs for him to consider.  With many fans and friends in the crowd today shouting out different college names and wanting him to choose their program of choice, Williams surprised the crowd in attendance with his decision.

Williams becomes the first 5-Star recruit to sign with Boyle and the Colorado program.

"I've always told you, I don't get into rankings, I don't get into how many stars are next to kids' names. But I know really special, talented players and Cody Williams is a really special, talented player," said Tad Boyle. "It's a testament to our hard work, my assistant coaches and how hard they work every single day in recruiting. It's a testament to Cody Williams and his family to look for the best fit."