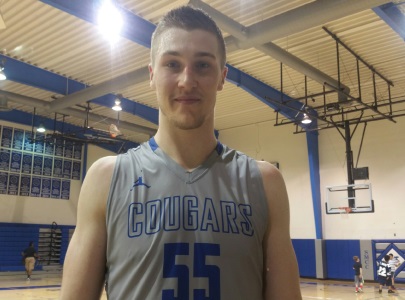 Top-rated Cochise College has hit their stride at the right time of the season, recently taking over the top spot in the ACCAC.  Cochise (22-5, 14-5) was coming off a nice come-from-behind road win over Scottsdale JC on Wednesday, but on Saturday afternoon Cochise would face the conference's hottest team at South Mountain CC.

South Mountain (16-11, 12-7) entered Saturday's match-up as winners of their last 4 games in a row, and playing their best basketball of the season.  These two programs would make for an exciting contest, in what would become the best junior college game I have seen this season.

Cochise would struggle early as a team to slow down South Mountain JC.  South Mountain has been led all season by a trio of players - 6-foot-9 sophomore post Connor MacDougall (University of New Mexico signee), 6-foot-4 freshman wing Terrence Johnson and 6-foot sophomore guard Jackson Price.  This talented trio would have their work cut out on Saturday against a high intensity defensive-minded Cochise team.

With Cochise struggling early to keep pace with South Mountain, tough sophomore guard Jeffrey Long would keep Cochise in the contest with some sharp three-point shooting.  South Mountain would be led early by the play of MacDougall and also 5-foot-10 sophomore point guard Desmon Johnson.  After a third three-pointer from Jeffrey Long from the corner, Cochise would take the lead, 23-22, with 9:10 left to play in the first half.

Connor MacDougall would keep South in the hunt after a power one-handed dunk on the break, and then a three-point play in the post.  After a mid-range jumper from MacDougall, a three-pointer from seldom-utilized freshman forward Gavin Wood would ignite South, as they would keep pace with Cochise in the first half.

South would not lay down though.  Behind the strong play on both ends by MacDougall, South would stay focused on the task at hand.  Two three-pointers from Jackson Price and Gavin Wood would bring South Mountain back to within 2 points of Cochise, 57-55.

Over the next 11 minutes of action, both teams would play some of the best basketball I have seen all season.  MacDougall would command the basketball in the post - looking like a serious steal for New Mexico head coach Craig Neal.  MacDougall's low-post footwork and ability to play amongst double-teams, was impressive.  While Arell Hennings would heat up for Cochise, MacDougall would play like a man possessed.  A strong, two-handed dunk by MacDougall and a another strong three-point play inside would tie the game with Cochise, 81-81, with :31 seconds left to play.

After a missed shot attempt by Cochise, the game would go into overtime.

In overtime, both teams continue to fire on all cylinders - both scoring the basketball at a high rate.  Arell Hennings, as he did in Wednesday's victory for Cochise, would ignite in overtime - knocking down consecutive, big three-point shots.  After a an offensive rebound and put-back from Cochise 6-foot-5 freshman forward Chaz Mack, Mack would collect the most important rebound of the game with 1.2 seconds left to play to give Cochise the overtime road win - 98-95.

Connor MacDougall would play his heart out, finishing with a game-high 31 points, 23 rebounds and 5 assists in the loss.  Jackson Price would finish with 18 points and 4 assists.

Cochise would be led again by Arell Hennings with a team-high 26 points and 4 assists, while Jeffrey Long would pour in 22 points, 8 rebounds and 7 assists.

Arizona Western JC lost to Pima JC on Saturday, so Cochise is now in sole control of first place in the ACCAC.