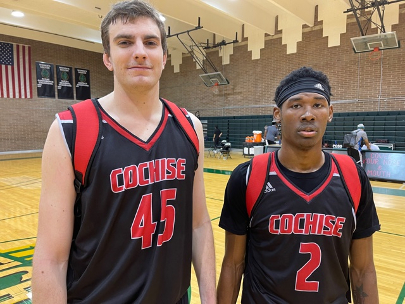 In exciting fashion, and after numerous exhibition games, the regular season for the Arizona Community College Athletic Association (ACCAC) got underway on Wednesday evening around the state with numerous league games taking place. In a complete tale of two halves, top-rated Cochise College, led by legendary Head Coach Jerry Carrillo, got back to business, after a COVID-stricken season a year ago where many ACCAC junior college programs either did not play or played a shortened season. Cochise, under Carrillo's leadership, always plays laser-focused basketball with a high level of intensity on both ends of the floor. This level of intensity and attention to detail by the Cochise program would help them overcome a game Scottsdale Junior College team in the second half - blowing the game wide open for a big 106-65 road win.

With the score tied at halftime, 36 all, after Scottsdale JC terrific 5-foot-10 freshman guard Carson Kelly would turn in a strong first half for the home team, Cochise would make some adjustments at halftime, and outscore Scottsdale 70-29 in the game's second half for the big road win. The overall level of talented players and bench substitutions by the Cochise team would wear down Scottsdale throughout the game, as well as the size and athleticism in the Cochise front court. Cochise will be very tough to beat this season again, and should look to compete against for another ACCAC Division-I title.

Here are some player evaluations from Wednesday night's contest of the top overall prospects and performers in the game for both teams that college coaches should take a hard look at this junior college season . . .

Jalen Trent 6-4 SOPH PG Cochise JC - A very big guard prospect that is a floor general for this ballclub. While he does not look to shoot the basketball or score much, he is a true facilitator that sees the floor very well and makes the right pass consistently for his team, and finds the open man on the floor. An excellent ball handler with good physical strength and quickness off the dribble. A strong finisher in the open floor and in the half-court set. Pushes the basketball up the floor to the open man. A strong on-the-ball defender that plays passing lanes. Has good size and length and is a good creator off the dribble. A strong rebounder from the guard position. Does not shoot it but his other intangibles are glaring. A nice guard prospect. Reminds me of former North Carolina guard Kendall Marshall. Recently received an offer from Cal Poly. A native of Baltimore, Maryland.

Oscar Cluff 6-10 FR C Cochise JC - A native of Australia, this post talent plays very big and has a long, lengthy frame that allows him to rebound strong and outside of his area. A strong finisher around the basket where he keeps the ball up high and does not play with the ball. Keeps balls in play for second-chance opportunities, and does not mind physical contact. Gets to the free-throw line quite often, where he is a good free-throw shooter. An active rebounder and shotblocker with good timing and length to change and alter shots. Runs the floor well in transition. Posts up big around the basket. OK footwork and solid low post moves, although this season he is not used much as a scorer, but will develop over time. A non-qualifier that will play for two seasons at Cochise, but should become a big-time recruit over time.

Tyreese Watson 6-4 FR SG Cochise JC - A native of Philadelphia, PA. A skilled guard prospect that has very good versatility and a nice overall skillset. A good shooter that can stretch the defense in the half-court set, and also is a strong finisher and scorer in the open floor. A very good athlete that is a utility player that can play several positions on the floor and does what it takes to help his team win games. An excellent ball handler and creator off the dribble that can makes scoring opportunities for himself. An active rebounder and finisher around the basket. A strong defender that plays passing lanes and is a very good on-the-ball defender. A nice looking prospect.

Jay Rodgers 6-2 FR PG/SG Cochise JC - A native of Columbus, Ohio, Rodgers is a fundamentally sound guard prospect with a pure shooting stroke with excellent range on his shot. A nice combo-guard prospect that can play both guard positions as needed, but is a pure scorer and shooter off the ball. Left hander. A strong ball handler and passer that sees the floor and takes good shots within the offense, where he shoots a high percentage. Can create effectively off the dribble and has a developed mid-range game, when guarded closely. A good defender with quick hands and feet. Finished with a team-high 25 points in the win. An excellent freshman guard prospect.

Stephen "Tank" Byard 6-7 FR SF Cochise JC - A native of Atlantic City, NJ. A skilled and versatile wing prospect that can play multiple positions on the floor and has the size, length and physical strength to provide value as a 3/4 prospect for this year's team, although his college position will be as a wing. An active rebounder and a strong finisher around the paint and from mid-range. Has a long wingspan which allows him to make plays at a high level and play much bigger than his size suggests. A steady performer. Can guard multiple positions on the floor. A solid shooter that takes high percentage shots and plays with a purpose. Will have a big season after a strong shortened season a year ago. A nice overall prospect.

Carson Kelly 5-10 FR PG Scottsdale JC - A smaller guard prospect that is a big-time scorer of the basketball and plays much bigger than his smaller size. Able to score effectively off the dribble and put up numbers quickly. Plays very fast and is electric in the open court. A gifted scorer and passer that gets his teammates involved, but can have questionable shot selection. A strong shooter of the basketball with range, and has a strong handle of the basketball. A strong floor general when decides to be one. A good defender with quick hands and feet. Pushes the basketball up the floor and gets better, with better players around him. Finished with a game-high 29 points in the loss. Will have a big freshman season scoring the basketball, but he is asked to do a lot for his team. Will be one of the better guard prospects in the ACCAC, after a strong high school career at Chandler High School.

Cameron Faas 6-6 FR SG/SF Scottsdale JC - A nice looking wing prospect with good size and versatility. An excellent shooter with range on his shot and a nice release. Can score inside and out, but is at his best as a catch-and-shoot prospect from the wing and perimeter. Has good overall versatility. Has a solid mid-range game. A solid finisher around the basket. Active rebounder. A solid ball handler and passer. Has upside. Has a bright future as a result of his size and ability to become a specialist as a shooter over time. His size and fundamental approach to the game are intriguing. A very good looking prospect that should develop.

Unisa "UU" Turay 5-10 FR PG Scottsdale JC - A smaller guard prospect that will play both guard positions this season, as he is teamed up with Carson Kelly, but he is a point guard prospect at his size. Can score the basketball but is at his best as a creator and distributor of the basketball for his teammates. A good shooter but is at his best off the dribble where he can create and get into the lane and finish strong at the basket. Smaller size makes it difficult for him to play off the ball, but his scoring prowess benefits him. A good defender that sits low to the ground and has very quick hands and feet. A strong ball handler. Solid passer. Questionable shot selection at times.