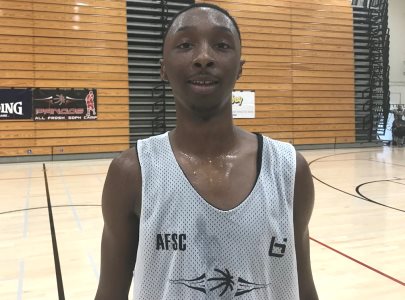 Recently, the state of Arizona's level of basketball talent received a shot in the arm when one of the nation's top 2022 prospects, Devontes Cobbs, a 6-foot-4 freshman prospect and stud prospect, moved from Milwaukee, Wisconsin and enrolled at Arizona power Shadow Mountain High School.  This past weekend, Cobbs showcased his superior young talent and skills at the illustrious Pangos Frosh/Soph Camp in Los Angeles, CA.

The Pangos Frosh/Soph All-West Camp, organized by one of the nation's elite scouts Dinos Trigonis, has been the proving ground for the top young prospects in the West for many years.  Annually, this event proves the West's top young prospects to watch for the future.  The event is held over two full days, and finishes with a Top 30 and Top 60 All-Star game.

Shadow Mountain's new promising prospect, Devontes Cobbs, proved his star potential last weekend, as he was selected among the top overall prospects in the event - being selected for the Top 30 all-star game.

Cobbs is a future elite high-major division-I prospect, and already possesses a division-I offer from the University of Florida.

Shadow Mountain has completely dominated the state of Arizona's basketball opposition for numerous years now, and this up-and-coming high school basketball season will be much of the same, as the program will again focus their sights on a national championship, rather than simply winning another state title in Arizona.  The addition of the young stud Cobbs, will only add to a dominant Matadors lineup, which already includes a starting line-up with (5) division-I prospects.