Coach’s Corner – What are the Qualities of a Point Guard? 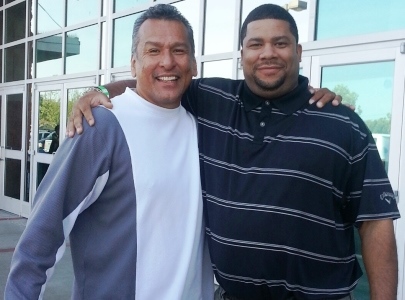 Coach John Saintignon is a former division-I assistant coach from Oregon State University, a former high school head coach from the state of Arizona and one of the all-time leading scorers at USC.  Coach Saintignon also currently coaches and trains professional players overseas and will lead the Coach’s Corner series on Arizona Preps.

What are the Qualities of a Point Guard?

I did an interview on radio in London, not too long ago, which will be a supplement to this.  Listen to our dialogue as we did a series with Athletic Intelligence Media and Anthony Gentle., on the Point Guard Series:

I was a shooting guard most of my playing career, until I was thrust into the Point Guard role my senior season at UCSD, and I had to learn how to develop into the guy that was focused on getting everyone else going in the game and not just me.  It was a role that provided me with authority, responsibility and most of all, a side-by-side role with my coaching staff - as once we left the huddle, it was me that had to take control of our team.

Now in my talks with players I share with them these 10 qualities that I want in a Point Guard.

1.) Leader - No doubt the most important trait of a point guard. A  leader isn’t someone who bosses players around. It means they are the one that organizes the offense, and makes sure everyone is on the same page - as far as the offense and defense is concerned.  They should take the brunt of the heat when the team doesn’t convert, so they make sure everyone is on the same page.  They should be the voice in the player huddle.  They are the straw that mixes the team.

2.) Play with two speeds - A high level point guard knows how to change speeds. Guards who play full speed all the time can be effective in transition, but, in the half-court, find themselves easier to guard if they are going at one speed at all times. Playing with two speeds enables a point guard to set their defender up at a slower speed, and then, when making a move, change speeds to penetrate the teeth of the defense.  Even if a guard isn’t very quick, they still can get in the lane and be a penetrator.  It’s all about setting up their defender and playing with two speeds

3.) Give the ball to teammates where they will be successful. - I don’t really like the phrase "a point guard makes players better."  They don’t put the ball in the basket more for teammates, or make them more athletic.  No, a point guard understands where and when.  Where on the floor to throw the ball to a player and when in the game to do so.  A great point guard won’t give the ball to an energetic center with little skill in transition 20 feet on the run.  They know that a player like that should only get it on drop offs, or hard rolls to the basket.  They also don't give them the ball in jail, a term used when the offensive player receives under the rim, can't do anything with it, goes up and shoots a bad shot.  It's the point guards responsibility as well as the post player.

A good point guard understands their team’s strengths and weaknesses better than anyone else.  They won’t call an isolation and give it to a spot-up shooter against the other team’s top defender; they know that they’ll have to penetrate and kick to them, or run that player off screens.  Those are a couple of examples of this.  Remember, a great point guard knows where and when.

4.) Have the ability to force two defenders to guard them. - A high level point guard has the ability to get into the lane, and force an off the ball defender to help off their man to stop them from penetrating - opening up another defender. Being able to get in the lane is so important for a point guard. Changing speeds has a lot to do with penetrating the teeth of the defense, and making off-the-ball defenders help off teammates to open up scoring opportunities. This is a big key to having an efficient team offense - forcing defenders into long rotations, and the only way to have this happen is to get the ball in the paint.  Even if a point guard isn’t overly explosive on their first step, and need the help off a pick-and-roll; getting the ball in the paint is the lifeblood of a point guard.

There are very high level point guards that aren’t long-range threats, such as Tony Parker (San Antonio Spurs-NBA) and Devin Harris (Dallas Mavericks-NBA), but they have the ability to knock down the mid-range to mid-range + (17-19 foot) jump shot. This makes defenders need to get out and guard them.  Being that the elbows are such a popular kill-spot of so many guards, that 15 foot jumper is so important. Screen and rolls, transition, and isolation situations, often call for guards to pull up from 15 feet.  Point guards can develop range in time, but I think at all levels it’s an important shot to master at the point guard position.

Having great vision in a point guard is so hard to find.  So many guards today want to pay attention to only the players that are guarding them, and not pay attention to the other four defenders on the floor.  Teams need playmakers that can create for others. I don’t think you have a chance of being a high-level point guard, if you lack the ability to see the floor and pay attention to every player on the court.  Watch great point guards like Steve Nash (LA Lakers-NBA) or DeRon Williams (Brooklyn Nets-NBA).  They always have their heads up and eyes are constantly moving to process what’s going on.  You can’t be a high-level point guard and have tunnel vision.

7.) Have the ability to be an on the ball defender - As a point guard, it is so important to be able to keep the player that you are guarding in front of you.  I’ve mentioned so many times thus far, that to be a great point guard you need to be able to get the ball in the lane. Well since that is true, stopping the ball from getting in the lane needs to be your goal.  You have to have active hands that are constantly moving to not only take away your opponent’s vision, but also have your off hand to be active to try and get deflections.  Lateral quickness is so important to constantly move your feet and change directions.  Generating a lot of steals does not make you a great on the ball defender. I think keeping your opponent outside the paint is so important, more important than getting steals.  You can get 3 steals in a game, but your opponent got in the lane all night scored 18 points on mostly drives to the rim, and dished out 8 assists - 7 of which were drop offs, because they drove by you and forced your big men to rotate to stop penetration opening up open lay-ups for their big men. With so much pick and roll run these days, that also is important to be able to guard the ball and get through ball screens. There is a lot to being a good defender besides getting steals.

There isn’t one way to finish.  Like anything else, you need to read the situation. Sometimes you can get to the rim, but in other cases there will be a defender waiting there for you forcing you to take a shot from 5 feet from the basket.  Being a great finisher comes with experience.  Just like anything else you will fail at first, and you need to understand why you failed and make changes to your game.

In the NBA you see guards that coming into the league that thought they could get to the rim at will, and found out quickly they will get their shots blocked by the height and length of shot-blockers.  In time, they worked on their finishing moves and developed many different ways of scoring in the paint.  Great finishing guards like Steve Nash, Tony Parker, and Rajon Rondo (Dallas Mavericks-NBA) are so good in having so many different ways to finish.  They know to the second of how deep they can drive it and when to release the ball, so it raises up just out of the reach of defenders.  It’s a skill that is developed over time.

9.) Communicator - The other four positions on the floor can lead by example and be soft spoken - unfortunately a point guard can’t.  Point guards are constantly talking to their teammates to the point where you want to tell them to shut up.  A great point guard is always talking and communicating to their teammates on both ends of the floor.  They are the ones that are talking in player huddles and organizing their team. You can’t be quiet as a point guard, as you are the most important position on the floor.  The point guard is the one who is the middleman that delivers their coach’s directions, and makes sure they get followed and communicated to the rest of the team.  Communication is such an important trait for a point guard. They can’t be quiet and take a back seat. Show me a great point guard and I’ll show you a great communicator.

10.)Tough/Thick Skinned - As a point guard your will can’t be soft.  It doesn’t matter if you are a rookie/freshman or veteran/senior - a point guard will take the brunt of the pressure.  It is your job to organize your team and get them into the offense and defense.  The coach and the rest of the team are counting on you to be a leader.  It’s the point guard’s job to make sure everyone is on the same page.

Coaches are hardest on point guards for a good reason.  A point guard can’t be a finger-pointer or hide from pressure and criticism.  It’s their job to take the heat when things go wrong.  There is no room for a point guard to blame others for the team’s demise.  You have to take the heat and make sure it doesn’t happen again.

There is no room at the point guard position for players who hide and point fingers. Toughness is one of the ten traits that can’t be replaced with something else.  Players and coaches love the point guard that can walk into the green room after the game and answer all the questions - head up, look people in the eye and say it was their fault, no one else's.   It focuses on solutions and cuts the blame game instantly so that the team can move forward.