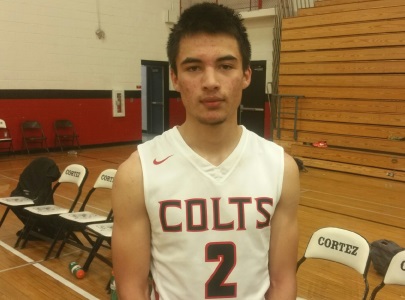 Cortez High School (12-6) has had some very successful seasons as of late, and now as a member of the state's Division-III Class, this year's team looks prepared to make some noise when it counts again.  A big reason for Cortez' hopes of winning a state championship this season relies heavily on the shoulders of talented 5-foot-10 senior guard Alfredo Jiminez (pictured) and their new coaching staff.

Jiminez has been a handful this high school season - averaging close to 26 points per/game on the season.  He has had numerous strong performances this season, and has his team in the hunt for a strong finish to the high school season.

Cortez is also comprised by a host of other talented performers in their starting lineup, but Jiminez has been the driving force for this team.  While playing the point guard position, Jiminez is able to make plays for himself and others, through a strong feel for the game and a nice ability to see the floor and push the basketball.  He is a very good finisher in the open court, where he likes to make plays in transition.  He has excellent range on his shot, although his shot selection can be questionable at times.  He is capable of stretching defenses with the long ball, or taking defenders off the dribble with a slick handle and a nice pull-up jump-shot.  He can score in the lane over bigger defenders with a variety of floaters and up-and-under moves.

Jiminez is an athletic performer for his size and has very good lateral quickness, combined with quick hands.  He is capable of becoming an excellent defender with more focus in this area of his game - an area of his game he will really need to focus on to compete at the collegiate level.

For Jiminez, he is in a great position this high school season, as he has been coached by some excellent members of the Arizona basketball community.  The Cortez HS coaching staff this season is comprised of some excellent former basketball players.  Current head coach John Jerome was one of the best basketball players the state has ever seen during his high school career at Prescott HS.  Jerome went on to have a nice career at Arizona State and a very long professional career.  His assistant coach is Gary Thompkins, a former star player at Iowa State.  Thompkins was a former college standout and is also the father of current Boston College starting guard Sammy Thompkins. These two former basketball stars lead this year's Cortez team - a true inspiration to the current Cortez players.

Jerome took over this season for former head coach Tarik James.  James has been absent from the team due to undisclosed personal reasons this season.  James built this team and was a former standout himself at Cortez HS (a graduate in 1992), and also Phoenix College and Concordia University.

The combination of Jerome and Thompkins leading a talented group of players, led by Alfredo Jiminez, has Cortez fans excited about this year's state playoffs.