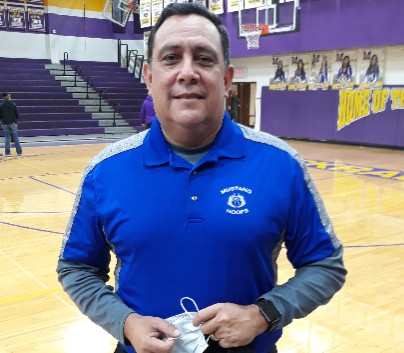 The Arizona Preps Coaches Spotlight Series is a hot commodity with the basketball community. Our readers have been enjoying this series, since it helps put a spotlight on Arizona’s best coaches. I came up with this idea this past fall, since I understand how coaching can be a thankless job at times. (I coached 15 years before joining Arizona Preps as a scout-publisher).

I had the pleasure of sitting down with Coach Henry Bribiescas who currently is the Head Girls Basketball Coach at Dobson High School. I was so excited to have the opportunity to interview Coach Bribiescas, since his family is a fixture in Arizona basketball and Arizona sports.

Q: How long  have you been coaching?

A: (20) varsity seasons, including this one. (26) years overall at the high school level.

Q: Which schools or programs?

A: I began coaching at the high school level at Dobson as a JV Coach in 1995.  I became a head varsity coach in 2001 at Desert Vista High School. In 2005, I relocated to Mesa Mountain View until 2015, returning to Dobson as the head coach. This is my 20th varsity season.

A: I coach to help to positively influence and teach my girls the life skills they will need beyond their high school days. I value the opportunity to help build character, integrity and confidence in themselves.

Q: What are your expectations for this season?

A: We always set high expectations for the season.  It isn't all about winning games.  We expect hard work, dedication, discipline and loyalty to our program. Achieving these expectations, will result in wins and a successful season ahead.

Q: Who are your key players to watch this season?

A: Seniors, Rachel Early and Jaden Leslie are the backbone of our team.  Both are in their 4th year of varsity play, who bring valuable experience. Both were 1st team East Valley Region selections last season.  They are also our leading scores from last season.  Aaliyah Garcia, has recently been activated recovering from shoulder surgery, is also a key component.  Freshman Ahdiayh Chee and Junior Siarra Beck also are valuable assets.

Q: What were the keys into keeping your program competitive year in year out?

A: Keeping our girls engaged in our values and expectations, while building relationships on and off the court is what keeps our program moving forward.

Q: What challenges did you face leading into this season due to the pandemic?

A: This has been a difficult season, to say the least.  We have managed though to fight through the obstacles and manage all the mandates while staying healthy.

Q: Your family has been very successful, if I am not mistaken all of your daughters had successful basketball careers, please let us know the highlights of their careers? You can brag.

A: God has blessed our family with great kids!  My daughter Monique (Bribiescas) starred at Dobson/Desert Vista, 2000-2004. She was First-Team All-State and Player of the Year in a few publications.  She appeared in two state championship games, and broke the AZ HS State Record for career assists.  She was inducted to the Desert Vista Hall of Fame last year.

She went on to earn a scholarship to New Mexico State University (2004-2008) helping the Aggies to successful seasons. She is now the founder of "MoBallin" and runs a successful  basketball program for today's youth!

My son Joshua, played basketball and golf for Mountain View (Mesa) (2011-2014).  He was a part of MV's State Championship Golf Team in 2013 and runner up in 2014.  My youngest, Shauna, played at Mountain View/Dobson (2013-2017). She was voted to the 6A All-State Team her senior year and was Player of the Year in the East Valley Region her senior year.  She starred at Pima Community College earning All-American Honors.  She is currently in her junior year at Rocky Mountain College in Billings, MT. My brother, William (1977-80) was also a State AZ Cross Country and Track State Mile and Two Mile champion for several years in High School and ran for Central Arizona College.

Q: I used to work in the Florence School System and I've met your sister Sonia and I know she's had a successful athletic career, as well what achievements has she accomplished?

A: My sister Sonia (Bribiescas) was a scoring machine while at Superior in the late 1980's.  She actually could have scored more points in her career as the three point line came into play her junior year.  She is one of the top scorers in AZ History averaging 24 ppg her sophomore year, 31 ppg her junior year and 29 ppg her senior year. In all, she broke the AZ scoring record in 1988, scoring over 2,100 career points. She went on to play at South Mountain Community College for two years, again leading the conference in scoring.  She was certainly one of the pioneers of girl's high school basketball.

Q: What does the sport of Basketball mean to your family?

A: Basketball has been in our family throughout my life!  We grew up in a small mining town, Superior, AZ, where we played many sports.  Baseball was my first passion.  Basketball was always my first love!  Watching my high school team win our first state title in 1974, when I was in 7th grade inspired me to learn the game, playing in high school and coaching throughout my career.

What an amazing story about the Bribiescas Family. I am so grateful that Coach Bribiescas took the time out of his busy schedule to “talk-story” (Hawaiian slang for conversation) about his program, as well as his family’s accomplishments. I can say the Bribiescas Family is creating a legacy by doing so much for Arizona Basketball. I look forward to seeing the Dobson Lady Mustangs make a deep playoff run.