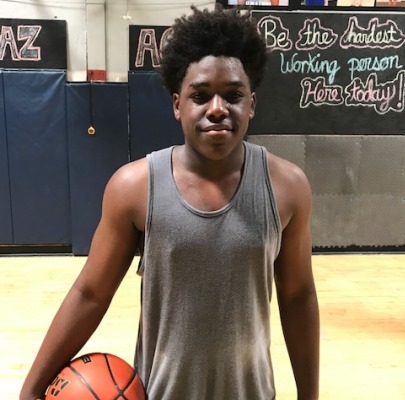 This past weekend, the Southwest Showcase Labor Day Classic took place with many teams and players in action.  While there were many top performances this weekend, Cactus Shadows High School's 5-foot-11 junior guard CJ Nnorum had a serious performance this weekend - his best performance of his young career.

While playing for the Arizona Aces club organization this past weekend, Nnorum exploded for 52 points in a loss by his team in the event.  According to Aces' club coach BJ Letcher, Nnorum went an amazing 12 for 15 from the field in the event - displaying an impressive ability to put the basketball in the hole.

I recently observed Nnorum in the a workout and also observed his play this spring and summer, and was very impressed with his ability to play the game, as well as his physical frame.  Nnroum is a serious sleeper prospect and very unheralded at this point in his young career.  He is well built for the future and ready to make an immediate impact physic, over time, at the collegiate level.

A 2019 prospect, Nnorum is currently entering his junior season at Cactus Shadows High School.  The team will be very talented this high school season, and Nnorum will be a major factor for the team's overall success this high school season.  Nnorum has the ability and the physical size to become a nice recruiting target for a smaller college program in the future, and is a definite sleeper prospect for a smaller college program.

I look forward to watching Nnorum this high school season, and will continue to watch his development as a player.  He is definitely one prospect that is worthy of some serious recruiting attention in the future.

Arizona Hoop Review Scouting Report:  Nrorom is a well-built, physical guard prospect with a superb shooting stroke with unlimited range, and a nice overall feel for scoring the basketball.  He is very compact in size but has the body that suggests that he is ready now for the college level.  He has good explosiveness off the dribble and a nice handle of the basketball, which allows him to make plays consistently off the dribble, while being able to stop and pop from almost anywhere on the floor.  Shot the basketball very well in the evaluation, and also showed an advanced offensive skillset.  He is a good finisher as well and can both guard positions on the floor.  I would like to see him focus defensively, where, if he can become a stopper, then he could raise his level of  play and exposure to college coaches.  One of the elite performers on the day.  A good sleeper guard prospect for the 2019 class.