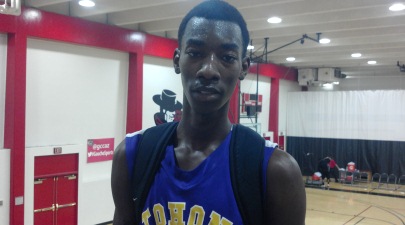 One of the top individual performers in the Arizona Community College Athletic Conference (ACCAC) is now officially off the recruiting board, as Tohono O'odham Community College talented 6-foot-8 sophomore forward Christian Thompson has found himself a division-I college home - signing with a program in the Big Sky Conference.

After taking an official recruiting visit last weekend to the University of Southern Utah, Thompson decided to pull the trigger - signing a division-I college basketball scholarship.  Thompson chose to sign with Southern Utah after receiving the majority of his recruiting interest from division-II programs.  After soaring well under the recruiting radar for much of the season, Thompson would seal the deal with a college program that could not pass on his unique talent.

Thompson is coming off a strong sophomore season for himself, where he averaged 16.2 points and 6.5 rebounds per/game, while shooting 56% from the field.  Thompson would turn in his best effort of the season with a 37-point effort on the road at Division-II national champion Phoenix College - a game in which Thompson led his team to a big road victory.

A graduate of Arcadia High School in Phoenix, Thompson also went under recruited in high school, before taking his career to Tohono O'odham JC.  Over the two year period, Thompson raised his level of play with hard work and dedication to the sport.

Congratulations to Thompson and his mother on this amazing accomplishment - again proving that it is not where you start, but where you finish.

Arizona Hoop Review Scouting Report:  Thompson is a very long and lean combo-forward prospect with a nice overall skillset that allows him to score the basketball from almost anywhere on the floor.  Thompson is a mismatch problem for most forwards, as a result of his size and length and ability to make plays off the dribble, or while catching and shooting the basketball.  He has a good overall feel for the game, and since he grew late in his life, he has good feet and hands.  An active rebounder.  Capable shotblocker.  Runs the floor well and is a good finisher in transition.  Solid defender.  Has very good upside.   If he can add physical size to his thin frame, he will reach his maximum potential as a player.