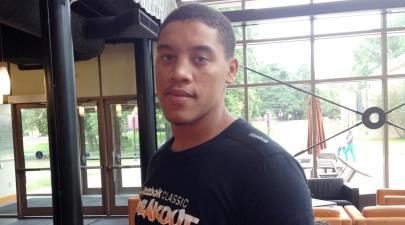 It has been a change of plans for Davis, as it was thought that Davis would spend a year as a post-graduate - competing all season for a prep school program.  Davis began the school year at San Diego Prep Academy, a prep program located in San Diego, California.  The now 6-foot-7, 225-pound prep forward had planned to attend the prep school all season, but decided to leave the school after he and his family realized that it would not be a good situation for him.

Davis then landed at Phase 1 Academy, another prep program located here in Phoenix, Arizona, where he is attending classes now.  Davis planned to do a full post-graduate year at the school, but recently elected to sign with Dodge City JC, where he will begin taking classes in the spring.

Davis’ decision to head the prep school route was primarily based on his desire to qualify academically, since he was not an academic qualifier at the completion of his senior season at Mountain Pointe.  As a result, Davis still needs a passing test score on the NCAA college entrance examination.

Davis was among the top overall prospects in Arizona’s loaded 2014 class, but became academically ineligible for the start to his senior season.

Anyone that has spent time with Davis since he moved to the state of Arizona from Mississippi and Ohio before that understands the amount of potential and sheer talent that this young man possesses.  A long and athletic post player that plays much bigger than his size suggests, Davis has the body of a much older prospect.  He attacks the rim with vigor and finishes very strong in the paint.  If Davis can develop a consistent jump shot out to three-point distance, he will see his game develop for the collegiate level – making him much tougher to defend as a player.

As a senior, Davis heard from such college programs as Portland State, Eastern Washington, Cal-State Bakersfield and Portland in his college recruitment.

I will continue to follow Davis’ progress on and off the basketball court closely over the next year, and bring you any recruiting updates as they continue to develop.