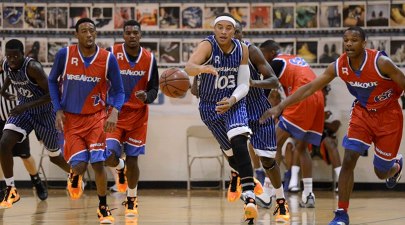 The busy summer recruiting month of July is valuable to Arizona prospects in many ways.  Obviously, the most important aspect of the summer is the opportunity to raise a prospect's exposure to college coaches and, ultimately, improve college recruitment.  For Mountain Pointe High School's 6-foot-6, 215-pound senior forward Chris Davis, the experience gained from playing against the nation's best prospects was just as valuable.

Davis missed the entire spring evaluation period with a foot injury, and, as a result, flew well below the recruiting radar for college programs.  Among the top overall prospects in Arizona's loaded 2014 class, Davis recovered just in time for the summer evaluation period, but returned out of shape in the most important time of his young high school career.

Davis became frustrated with himself, as he was unable to soar in the air like he was accustomed to doing and had to settle with being a low-post player that would have to change his game to help his club program win ball games.

Davis first received the biggest honor of his basketball career, when he was selected to participate in the prestigious Reebok Breakout Camp in Philadelphia, PA during the evaluation period in July.  While playing each of his camp games in front of hundreds of division-I college coaches, and playing alongside the nation's best talent, Davis was unable to compete at the level he expected of himself.  While he still raised some eyebrows with his athleticism and versatility, Davis knew that his time would have to come later.

Davis would watch as fellow Arizona prospects Michael Humphrey and Andre Adams would blow up in the event, as both would be selected for the camp's all-star game.  Humphrey would see his college recruitment skyrocket at the Reebok event.

Davis would then finish out the summer with his club program, the Arizona Magic Pump N Run-2014's, and help the team to one Elite 8 finish in Los Angeles and a strong showing in Vegas.

After several previous moves by his family and finally settling down at Mountain Pointe High School just a year ago, Davis turned in a strong junior season last year.  As a result, Davis became one of the state’s elite prospects for a talented Pride team that made some serious noise down the season stretch – knocking on the door in the state playoffs last season.  The team would fall just short in the state playoffs – losing by one point to eventual two-time Division-I state champion Corona Del Sol HS (65-66).

While Mountain Pointe would fall short, Davis would cement himself among the top prospects in an already super loaded 2014 class.  With such a strong class, possibly the best in Arizona history, Davis has become an unheralded recruiting target that will look to make some noise during his senior season.

Mountain Pointe HS will also be under the leadership of a new head coach this season, as long-time top-rated coach Hoseah Graham will take over the helm, after leading Westwood HS last season.  Graham, a former Coach of the Year in the state while at Seton Catholic HS, will look to lead the Pride this season to another strong finish, and develop the players in one the state's most athletic programs.

Anyone that has spent time with Davis since he moved to the state of Arizona from Mississippi and Ohio before that understands the amount of potential and sheer talent that this young man possesses.  A long and rangy and also ultra-athletic post player that plays much bigger than his size suggests, Davis has the body of a much older prospect.  He attacks the rim with vigor and finishes very strong in the paint.  Looking very similar facially to that of NBA forward Michael Beasley, this young man is only scratching the surface of just how good he can become as a player, since he has only been playing the game of basketball for 5 years.

Currently, Davis is hearing from such college programs as Portland State, Eastern Washington, Cal-State Bakersfield and Portland, and his recruitment should soar throughout the high school season, as more of the top-rated prospects in Arizona's 2014 class begin to fall of the recruiting board.  Davis will look to make his college decision during the late signing period in the spring.