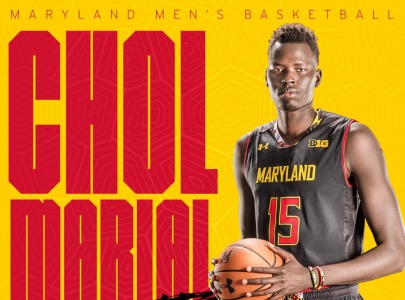 After a long and lengthy recruiting process, which has lasted for many years for such a big-time talent, it is finally over for AZ Compass Prep 7-foot-2, 230-pound senior post Chol Marial, after Marial decided to give a verbal commitment to the University of Maryland and Head Coach Mark Turgeon on Monday.

After an historic young career where he was regarded for a long time as the next big thing in high school basketball recruiting, and was slated to go right to the NBA, and not college, nagging injuries slowed Chol and his development down, and, ultimately, his college recruitment.  While not playing much over the past several years, Chol lost a lot of the national attention and luster that he once had, but he remained confident in himself and his own potential, on and off the basketball court.  While many did not believe he would play again, Chol did, and so he returned to action this high school season.  While many did not believe he could qualify academically, he did, and now he is on pace the graduate from high school and be academically eligible per NCAA standards.

Chol had been very vocal for some time to those close to him that has always been excited about going to college, and now, after months of hard work, he will achieve his dream - giving a verbal commitment to the University of Maryland.

Many college programs had fallen off of recruiting Chol, wondering whether he would return to the form that had made him one of the most dominant prospects in America.  As a result, Chol waited to make his final decision, and elected to not play through the spring evaluation period, but rather has worked closely with his personal trainers on his body and game.

According to Sidd Sharma of Explosive Athlete Institute who worked closely with Chol over the past couple months, he advised me that he was very impressed with Chol as a person, and also his work ethic and desire to be successful in life.

Chol worked very hard with the AZ Compass Prep coaching staff daily, and the school's staff of teachers to become academically eligible.  It was definitely a village that came together to help this young man in his pursuit to play college basketball, led by the leadership of Zy and Rhonda Owens at the school, as well as Swen Anderson and assistant coach Pete Kaffey.

Marial, the nation's former #1 ranked national prospect for the 2019 Class, quickly emerged on the national basketball scene as a mere dominant 8th grader.  Marial was one of the nation's premier prospects for some time, but nagging injuries over the past couple years, caused him to miss a lot of action on the basketball court.  A native of Sudan, Chol spent last season at IMG Academy in Florida, after spending two seasons at Chesire Academy in Connecticut.

Chol returned this season to action in January, but saw limited action throughout the season, as a result of similar injuries.  While many college programs chose to pass on Chol as a prospect, he is a sure-fire low risk and high reward prospect.  If he can stay healthy, Maryland is getting a bonafide future NBA post talent with unique length (7-foot-11 wingspan) and athleticism, and an advanced skillset.  If he is not healthy, well it is flat-out worth the risk.  It is scary to think of Chol on a disciplined strength and conditioning program, with sufficient nutrition and a medical staff at his beckoned call.  I believe Maryland is getting an absolute steal here, and will be very happy with what they are getting, as there is nothing like Chol in the country, when he is healthy.

Congratulations from our Arizona Preps' staff on this amazing accomplishment by Chol to him and his family, as well as to the AZ Compass Prep program on what they were able to accomplish with this young man.  He has definitely been through a lot and his future is extremely bright again.

Arizona Hoop Review Scouting Report:  Marial is an ultra long and lengthy post prospect with superior length of body and a strong motor physically.  He has NBA size and length already and an advanced offensive skillset that allows him to score inside and out.  Marial is a futuristic post player that has a soft touch on his perimeter shooting stroke with unlimited range, and is able to score effectively around the basket with a variety of jump hooks and dunks - strong finishes at the rim over defenders.  He has very good footwork and runs the floor very well like that of a smaller post player.  He has nice lift off the ground and is able to finish very high above the rim.  A very good passer that sees the floor and is very unselfish.  Handles the basketball for his extreme size and length.  An active rebounder that is able to rebound outside of his area on the floor.  An excellent shotblocker with excellent timing and activity around the basket.  A game changer on the defensive end of the basketball court, and able to completely change a game with his command presence on the floor.  Has an amazing future ahead of him if he can remain healthy.  A definite future NBA talent.