Chol Marial Back To Form In Compass Win 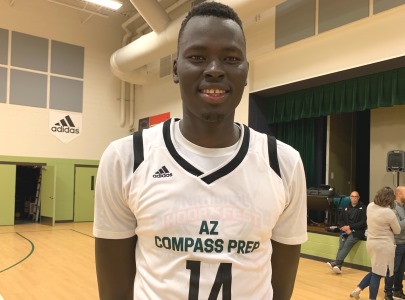 After more than a year of not playing and nursing several nagging injuries, AZ Compass Prep, 7-foot-3 senior post Chol Marial is now back on the basketball court, and looking much like his old self.  On Saturday afternoon, in his team's big 103-75 victory over the Hillcrest Prep Post-Graduate team, Marial once again looked like an elite high-major division-I prospect, as he led his team to victory.

In the win, Marial showed excellent athleticism and lift off the ground, while running the floor hard.  He also displayed good physical strength and endurance on the basketball court - proving that he is getting into physical shape and his body is improving.  He dunked the basketball with vigor in traffic on the break, caught alley-oops well above the rim, and also jumped high for rebounds.

Marial was recently cleared to return to action and now has 5 games under his belt.  He has shown excellent improvement in each game physically, and Saturday was the first game he played with his old tenacity on both ends of the floor, and showed excellent confidence in his ability to make plays.  His raw agility on the floor and footwork are glaring attributes, and as the season progresses, basketball enthusiasts will, at some point, get an opportunity to see a prospect that was once regarded as the #1 prospect in America and a future NBA lottery pick.

Marial does not currently list any leaders in his current college recruitment, but he has indicated that he plans to attend college next fall, and recently took the NCAA college entrance examination.  I expect that the AZ Compass campus will be extremely busy over the next several months, as college coaches figure out that Marial is back and healthy.  He is as good an unsigned senior prospect as there is in the country - right now.

Scouting Notes:  AZ Compass 6-foot-2 junior guard Jalin Anderson had an excellent showing on Saturday as well, and played one of his best games to date.  Anderson shot the basketball very well with range, scored effectively off the dribble and finished strong in the paint over and around defenders - showing excellent body control.  Anderson also ran the team well and made good decisions with the basketball.  He is a nice sleeper prospect in Arizona's talented 2020 Class, and is well deserving of much higher college recruitment than he is currently getting . . .

Hillcrest Prep 6-foot-8 prep forward John Harge looked very impressive on the day.  Harge showed excellent versatility as a player - handling the basketball in the open court and making plays for himself and others.  He finished very strong at the rim and showed good athleticism in the open court.  He has a nice body that is division-I ready now.  Needs to add some more consistency to his shooting stroke from longer ranges, but he is a true combo-forward prospect that can play and defend both 3 and 4 positions on the court.  Recently received an offer from the University of Tulsa.  University of Arkansas has recently expressed interest . . .

AZ Compass 6-foot-5 junior guard Xavier Dusell may have played his best game on Saturday at the program.  Dusell shot the basketball with excellence on the day, knocking down (4) three-pointers for his team early, which blew open the game.  Three of his four attempts were well contested by a defender.  He also got to the basket and finished strong around defenders.  It first took some time for Dusell to adjust to the level of talent in the prep ranks, and now he has gotten stronger physically and looks right at home.  A very good ball handler and passer with very good versatility as a player.  A solid mid-major prospect that could see his college recruitment improve a great deal with a strong finish to the prep season, and a good spring and summer performance . . .

Hillcrest Prep 6-foot-5 prep guard Dave Francois showed a very nice and pure shooting stroke on the day, combined with good size and athleticism on his thin frame.  He has unlimited range on his shot and a quick release, which allows him to get it off quite easily against defensive pressure.  A good ball handler and finisher in traffic.  Good slasher.  Good in the open floor.  A nice sleeper prospect with promise for the future . . .

AZ Compass Prep 6-foot-4 senior guard Carlos Ramsey is an underrated prospect with good overall toughness as a player, and a good mid-range game which allows him to be effective as a scorer.  A good finisher at the basket and does not mind physical contact.  A left-hander.  Good slasher and finisher in the lane.  Good in the open floor.  A solid shooter but lacks consistency from longer ranges.  At his best from mid-range.  A very good defender that plays passing lanes.  Plays with good intensity . . .

Hillcrest Prep 6-foot-8 prep post Chase Courtney has really improved over the past two seasons, and his best years are still well ahead of him.  A skilled post player with an ability to score inside and out.  An active rebounder.  Capable shotblocker.  Runs the floor and finishes.  A sleeper prospect for a smaller school.  The juco ranks would benefit him nicely in his college recruitment, since he has good upside as a college prospect.  Son of former NBA player Joe Courtney . . .

Hillcrest Prep 6-foot-3 prep guard Bo Quinlan is the younger brother of Montana State's Zeke Quinlan.  A sharp-shooting guard prospect with a quick release and nice range on his shot.  A capable combo-guard prospect but likes to play the role of a scorer and shooter much more than setting up his teammates, but he is capable of playing both guard positions.  A good athlete with an athletic frame.  Runs and does not seem to tire out.  An active rebounder and a good one for his size.  A good ball handler and passer.  Fundamentally sound.  A sleeper prospect.