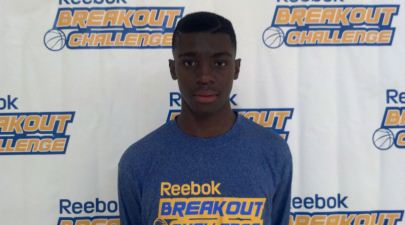 Westwind Prep Academy transfer, 6-foot-7 talented rising junior forward prospect Zylan Cheatham is having a big off-season for himself and, as a result, continues to impress many college coaches, scouts and media with his length, athleticism and high skill level.  While still needing work on his ability to shoot the basketball with range, Cheatham is now handling the basketball like a guard and has shown a great deal of versatility in Los Angeles, CA this weekend - enough to garner another high-major division-I offer for himself.

This weekend, while playing with his club program, the Arizona Magic Pump N' Run-2014 in the Double Pump Best of Summer tournament, which is being held at the amazing Anaheim Sports Ccomplex, Cheatham has led an injury-laden team of 6 players to a 5-0 record in the event.  After losing several players during the event to injury, head coach Jeff De Laveaga moved Cheatham to the point guard position during stretches in the game to open things up for other players on the team.  Cheatham has handled the transition nicely and has helped his team advance.

"I've been working hard on my ballhandling, so I feel comfortable doing it," said Cheatham.

Cheatham's versatile performance Friday helped lead his Magic team to two victories.  First, a big 65-48 win over the Mavericks (CA) and then a tough, grind out 60-55 win over the Nor Cal Warriors (CA).

Cheatham would receive an offer from Oregon State University after his team's first win of the day.  The offer would come at the hands of assistant coach David Grace, former South Mountain HS head coach and a former valley resident.  Cheatham was a stand out prospect for South Mountain HS last season, before deciding to transfer schools this summer and take his game to Westwind Prep's new national high school team.

Cheatham is one of the state’s hottest young prospects after already having a strong spring performance thus far, and looking to have an even bigger summer.  In the spring, Cheatham turned in a big performance in the Double Pump Hoop Fest, where he helped lead his Arizona Magic Pump N’ Run-2014 team to the championship of the 16U Division in the event.

Cheatham’s length, huge upside, versatility, defensive prowess and athleticism are glaring and have raised the eyebrows of many college coaches in the West.

Cheatham advised me that he still does not plan to make his decision on a college anytime soon, and would rather take his time in making his decision for college.

Arizona Hoop Review Scouting Report: I have regarded Cheatham as a future big-time prospect, but he has put it all together much quicker than expected showcasing his superb athleticism, defensive ability and willingness to make sacrifices for his team to win. Cheatham is a high-energy, ultra-talented prospect with amazing upside as a player, and terrific work ethic. He will only continue to improve as a player a great deal over time, but his value as a lengthy wing prospect is a nice attribute that will have college coaches beating down his door over time. A very good mid-range shooter and player, but needs continued work on his jump shot with range to reach his full offensive potential as a player. Excellent slasher and open court player. Very few wing prospects can control the game defensively as Cheatham can, and as he continues to improve as a player offensively, watch out. Excellent shotblocker with good timing. Another elite-high major division-I prospect in an already absolutely loaded 2014 class for Arizona.