Chavez Looking To Win 6A Title 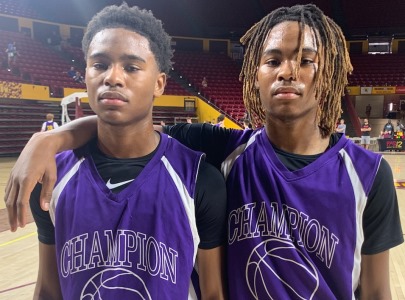 Cesar Chavez High School has been one of the state's most consistent and winningest basketball programs in Arizona over a 20-year span, as the program has consistently posted winning season after winning season under Head Coach Gary Lee's leadership. Lee has been coaching the program for more than 20+ years, and while the program has had tremendous success over the years, this high school season will be a big one for the Champions as they look to win the 6A State Championship.

Under Lee's leadership, Chavez has been the state champion runner-up in 2009 and 2012, and also has reached the (4) different final fours in 2011, 2013, 2014 and 2017. While many basketball enthusiasts in the state have believed that Chavez should have won previous state championships, this season will give Chavez their best opportunity to win it all since 2012.

Gary Lee's background was in football, and he has used previous life experience to help him coach today's student-athletes. Lee has had to overcome a lot in his tenure at Chavez, but he has done an excellent job in being a consistent role model for the young men at Chavez. While he has never been considered an X's and O's coach, this season he will not need to rely so much on his coaching strategy, since the team will be led by the state's top junior guard prospect Ty Ty Washington.

Washington is an excellent floor general and playmaker with the basketball in his hands, and he can get a basket when he wants as well. Washington's ability to play the game and build confidence in his teammates will be vital down the stretch this high school season for Chavez. Washington's sheer ability to play the game at a high level and the extreme confidence he plays with and generates for his teammmates will make all the difference this high school season for the Chavez team and coaching staff.

Chavez has had some excellent point guards over the years and throughout Gary Lee's time at Chavez. Loyola Marymount guard Brandon Brown is the most notable for Chavez, a program that has been loaded with individually talented prospects over the years. The Chavez program though has never had a prospect that has been as highly regarded as Ty Ty Washington. Washington is currently one of the hottest prospects in the West, and has received close to (20) different division-I scholarship offers for himself. Recently, Washington has received offers from such college programs as DePaul, Maryland, Oklahoma and Washington State, and already possesses offers from Arizona State and TCU, to go with many other offers.

Having strong guard play is essential in winning a state title, and Chavez has the best backcourt in the state. Joining Washington in the backcourt is junior guard Ricardo Sarmiento. Sarmiento has started both previous years in the backcourt with Washington, and the two guard prospects have almost become synonymous with one another, as they have played together for many years. Sarmiento is a heady and skilled guard prospect with an ability to score the basketball and create opportunities for himself and others off the dribble. He is as tough a guard prospect as there is in the state, and I look for Sarmiento to team up again this season with Washington to make Chavez very tough to beat in the 6A Division.

The Chavez team will have excellent guard play this high school season, and Washington and Sarmiento will also be supported nicely by senior guard Tyraill Carrethers, who is a very tough defender and a good scorer as well. Carrethers averaged almost double-figures as a junior. Senior guard Ashton Owens will also provide excellent depth in the backcourt, while twin brothers, senior guards Latrey and Latrell Robinson (pictured) will provide excellent depth at both guard spots and excellent toughness and defense. The Robinson brothers are tenacious and compete every night. They are the heart and soul of this year's team.

The backcourt will be improved a great deal also by the addition of freshman guard Tru Washington. Washington is among the most talented freshman prospects in the state. He can play both guard positions and is a big-time scorer and playmaker, especially as a mere incoming freshman that already possesses an offer from UC-Santa Barbara. Washington will look to make an impact this high school season on a team loaded with talent and favored to win it all.

The Chavez frontcourt will need to come up big for them this high school season, since the backcourt will be so tough all season. The frontcourt will be led by the play of 6-foot-3 junior wing Ravion Hodge, who is very skilled and adds excellent versatility for the team. 6-foot-5 senior forward Nyjier Andrews is also an athletic rebounder and finisher and should help a lot inside. The Chavez coaching staff is expecting a big year from both Hodge and Andrews this season. 6-foot-4 senior forward Greg Evans will also provide interior depth for the Champions, while freshman Tru Washington will also provide depth in the Chavez frontcourt.

Last season, Chavez finished with an impressive 24-5 overall record on the season, but would fall at the hands of Chaparral High School on the road in the 6A State Playoffs. It seems like so long ago. I look for Chavez to improve on last season's terrific record, and win it all this high school season. Look for this Chavez team to give Head Coach Gary Lee his best chance to win it all.