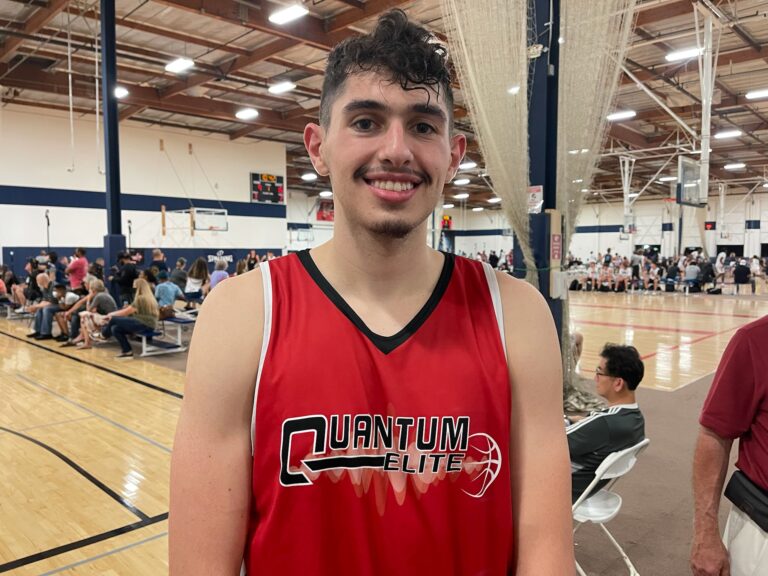 While an unknown college prospect before the beginning of the spring's season, Chaparral High School's hard-working 6-foot-8 senior post Michael Saba has worked his way into the conversation. A long and mobile post talent, Saba emerged throughout the spring and summer with some very good production on the club circuit. As a result, Saba is now hearing from many different smaller college programs, and is preparing to have a big senior season for Chaparral in the state's tough 6A Division.

Saba will look to have a breakout season for Chaparral after a junior season where he contributed good numbers, averaging 9.9 points and 5.3 rebounds per/game. Saba had a good junior season, but will look to increase his overall production a great deal this season, as he has developed physically a great deal and worked very hard on his game over the past (6) months. As a result, Saba should become one of the state's best overall performers this high school season, and also one of the more sought after unsigned senior prospects in the state this spring.

Look for Saba to increase his overall numbers immensely this high school season, the final season of his high school career. This summer, while traveling with his club program, Quantum Elite, Saba turned in numerous strong performances against some strong competition. His play caught the attention of numerous college programs at the Division-II level and also LeHigh, Dartmouth and several other IVY League programs. Saba is an excellent student and has a 3.38 CUM GPA and scored an impressive 29 on the ACT. Currently, Saba is hearing from many different Division-II programs, and also should generate much more Division-I interest this high school season after a strong campaign.

Saba is a unique prospect in Arizona high school basketball, as he is very mature, on and off the court. He plays with a purpose and is very fundamentally sound. He has a very advanced skill level with superior footwork and an ability to score inside and out. He has a nice shooting stroke with some range and is consistent out to the arc. He also has a very good jump hook and a strong ability to score from mid-range at the high post or from the wing. Saba is a complete offensive performer that should only continue to improve over time, as he matures and continues to get physically stronger and more explosive.

Saba runs the floor hard and is a strong finisher in the open court. He is a good overall finisher and is able to beat most post bigger post players down the floor. He is a goof passer out of the post and also outlets the basketball to the guard to start the break. He is an active rebounder that rebounds outside of his area. His best attribute is his ability to block and change shots, which he does quite well as a result of his length and timing. He also plays with very good intensity and is a great teammate.

Saba has serious work ethic, which will benefit him nicely over time. He will work himself into becoming a serious player that should be able to benefit from everything the game throws at him. Saba advised me that he lost his father several years ago, and he is now motivated to be very successful on and off the basketball court to show respect to his mother, Kimla Saba, that has raised him by herself since his father's death. I have personally never met someone exactly like Saba, as the focus and determination in his eyes, when he told me about his father, moved me. I became his fan almost immediately, and continue to root for his personal success - on and off the basketball court.