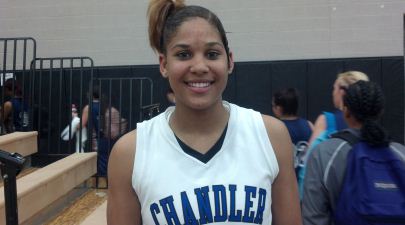 Top-ranked Chandler High School's girls program ranks among the best in the country, and Tuesday evening they improved their record on the season to an impressive 22-4.

The victory was a route - a 65-21 blowout victory over Cienega HS in this year's first round of their Division-I sectional tournament (Section II).

Chandler has had a terrific season thus far, even while playing without the services of star, senior post player Je Zhe Newton (injury) all season. Newton plans to return to action this week.

Led by the strong play of ultra-talented 5-foot-9 senior guard Simone Westbrook (University of Arizona signee) this season, and stellar 5-foot-3 senior point guard Dezirae Elias, the Wolves have won their last 12 games in a row. Their last loss on the season came at the hands of nationally #1 ranked St. Mary's HS - a narrow 68-62 defeat.

Westbrook is as good a performer as there is in the state. A strong and athletically gifted guard prospect with excellent physical size and strength, Westbrook is the younger sister of superstar Arizona high school product Lawrence Westbrook (University of Minnesota graduate).

Lawrence Westbrook broke a single-season, state-record with 40.1 points per/game in his junior season at Chandler High in 2004-05.

Simone Westbrook came out focused Tuesday evening, as she would lead her team to a 19-0 start to the game. Cienega would finally score their first basket of the game in the game's second period, but Chandler would take a 39-11 halftime lead and would not look back in the victory.

Chandler would cruise to a 65-21 win in the first round of this year's sectionals, and advance to the second round Wednesday evening where they will face a highly competitive Red Mountain HS team. #4 seed Red Mountain defeated Hamilton HS 57-53 on Tuesday evening.

Notes: Chandler HS fearless 5-foot-3 senior point guard Dezirae Elias suffered what looked to be a serious shoulder injury in the game, after she dove for a loose ball out of bounds with 4:22 remaining in the third period. Elias will be questionable for Wednesday night's game, although if she can she definitely will. This young lady is as tough and also as important to her team as any other player in the state.