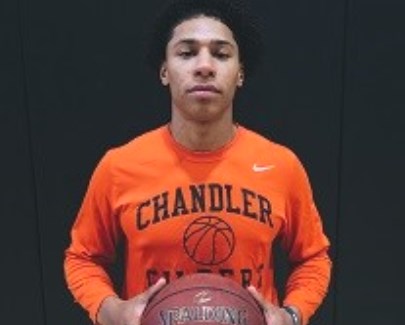 The ACCAC standings are bunched up to start the 2018-2019 junior college season, as Chandler-Gilbert Junior College and Scottsdale JC are now tied for a first place lead in the conference standings.  Both Division-II programs, these two schools were unlikely thought to be in the lead before the season began, but the strong leadership of hardworking head coaches, Mark Bunker (Scottsdale) and Steve Silsby (Chandler-Gilbert) has both their teams in the hunt for the conference regular season titles to start the year.

On paper, it would be a match-up of two of the conference's top two point guard prospects from the sophomore and freshman class.  Chandler-Gilbert's 5-foot-11 sophomore guard Kendrick Williams (13.9 points per/game) is our top sophomore point guard in the conference, while Scottsdale's freshman guard Donald Carter (15.6 points, 6.4 rebounds and 8.3 assists per/game),  has been terrific this season, and looks to be the best overall point guard in the conference this season.  Carter has already being selected as the D-II ACCAC Player of the Week twice early in the year.  Both prospects would match up in this contest, in a game that might not have one division-I prospect on the floor, but rather two very good teams that are well-coached, compete hard and play the game the right way - sharing the basketball and looking for the open man.

It would be a closely played contest in the first half, until athletic sophomore guard Ilisia Washington would give Chandler-Gilbert a two-point margin, 24-22, with 3:20 left to play in the first half.  A Donald Carter floater though would tie the game at 24 all with 2 minutes to play, and Scottsdale would take a narrow 25-24 lead into halftime.

In the second half, Head Coach Mark Bunker's imprint on this year's Scottsdale team would show, as they looked much like last year's Sunnyslope HS team - moving the basketball unselfishly to the open man and taking high percentage shots in the offense.  Scottsdale would jump out to their biggest lead in the game, a 6-point margin, 35-29, with 15 minutes left to play in the game, after a layup in transition from freshman guard Mark Hatch.

But Chandler-Gilbert would not lay down, as Kendrick Williams would make his presence felt - finishing a strong three-point play, after being fouled and converting a driving layup over two defenders.  Another three-pointer from the corner by Williams with 7:45 left to play would pull Chandler-Gilbert to within one point, 46-45.

Then with 5:18 to play, freshman guard Blake Williams would finish a driving layup to give Chandler-Gilbert their first lead since the first half, 50-48.  After another drive to the basket from sophomore guard Joe Abiakam, and then a left-handed driving layup from Williams, and Chandler-Gilbert would take a 54-49 lead with 1:53 left to play.

Scottsdale would fail to get back into it after that point, and Head Coach Steve Silsby and his fired up Chandler-Gilbert group would finish off a big 62-55 home win - tieing Scottsdale for a first place lead in the conference.