Chandler Gets Big Road Win Over Hamilton In Overtime 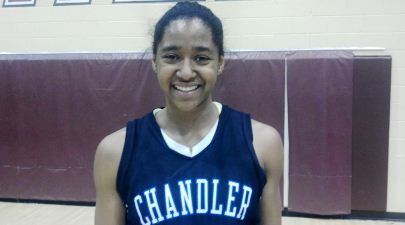 Chandler High School's girl's basketball team has produced many of the state's top players over the years and has fielded an elite basketball program since the hiring of head coach Zon Thompson.  This year's team though has been up and down, behind some injuries, recent illnesses and an intense game shedule this season.

Chandler (15-7) has had arguably the toughest game schedule of any team in the state this season.  While having 7 losses on the season, the Wolves has played the state's best high school programs.  Their seven losses have come at the hands of top-ranked local and out-0f-state competition - Pinnacle, St. Mary's (2-times), Mesquite, Dobson (2-times) and top-ranked Etiwanda HS (CA) in this year's Nike Tournament of Champions.

As a result of such a challenging schedule, the Wolves have become very battle-tested and are now prepared to make an excellent run in the post-season this year.

"We have had the toughest schedule in the state this year," said Chandler HS head coach Zon Thompson.  "But we are still here."

The Wolves entered Tuesday's night match-up with top-rated Hamilton HS (21-4) as winners of their last four games on the season, and not just wins against anybody, but rather some strong opposition.  Chandler had recently defeated Corona Del Sol, a loaded Desert Vista team, Perry HS and also Mesquite HS.  Now Chandler would look to knock off one of the state's most talented groups on their home floor.

The game was action-packed and fierce from the start, as both teams fought hard to gain an advantage on one another.  After a tight first quarter of action, both teams would continue their on-the-court war in the second period.

With Chandler leading, 20-18, in the second period, Hamilton's 5-foot-6 senior point guard Alexa Hogberg would steal the basketball and finish a transition layup to tie the game.  But Chandler would fight back behind consecutive driving baskets from talented 6-foot-1 senior post Jazmyne Bartee (UNLV signee) and 5-foot-6 senior guard Jesse Ossian.  The talented pair would play a major role for head coach Zon Thompson in the game.

After taking a 24-20 lead with 2:54 left to play in the first half, and after a timeout called by Hamilton head coach Jeff Kain, Alexa Hogberg would drive down the lane uncontested for a layup after the inbounds.  Then, after a long-range two-pointer from Chandler's 5-foot-3 junior guard Alina Lopez, Hamilton's talented 6-foot senior forward Aliyah Dickson would finish an offensive rebound with a left-handed put-back with :32 seconds left to play in the first half.  With 7.8 seconds remaining in the half, Dickson would get fouled again and head to the free-throw line - making 1 of 2 free-throws to pull her team within one point of Chandler.

Chandler would take a narrow 26-25 halftime lead into the locker room.

The third period would begin as the first quarter began with an intense, fast-paced game with hard physical play.  The game would remain tied for 2 full minutes, as both teams would miss opportunities to score amidst a tough defensive effort from both sides.

With 5 minutes left to play in the third period, 5-foot-8 junior forward Skylar Ossian would break the tie - scoring a basket inside for Chandler.

With Chandler hanging in the game and preventing Hamilton from running away with the lead, the Huskies would continue pouring it on.  A three-pointer in transition from ultra-skilled 5-foot-10 senior forward Kyndall Adams, and another transition basket from gifted 5-foot-7 freshman guard Payton Whitmore and Hamilton would jump out to a 43-35 advantage.

But Chandler would weather the storm and climb back behind the strong play of talented post Jazmyne Bartee.  Bartee would ignite Chandler's team with her strong defensive effort, and ability rebound and finish strong inside the paint.  Bartee would score inside the painted area just before the end of the third period to pull Chandler within 6 points, 43-37, after three quarters - setting up an excellent final quarter in the game.

In the fourth, Chandler would quickly look to get things going.  5-foot-9 freshman forward TreAnna Frazier would score on a drive to the basket to pull Chandler within 4 points, 43-39.  But then Hamilton would push their lead back to an 8-point advantage after another offensive rebound and put-back by Dickson, and a left-handed mid-range jump shot from 5-foot-9 junior guard/forward Ashlee Moore - 47-39.

Again, Chandler would storm back in the game after a three-pointer from the corner from 5-foot-5 senior guard Beatriz Martinez.  After another Chandler basket and a loose-ball foul, which would give Chandler the basketball back again, Jazmyne Bartee would go to work inside and score on a turn-around jumper inside the paint.  Bartee's basket would bring her team within 3-points, until a three-pointer by Jesse Ossian on the next play would tie the game at 48 all with 3:54 left to play in the game.

After a Hamilton score, Ossian would tie the game again with a floater off the glass with a defender draped all over her with 2:52 left to play.  Ossian would come up huge for Chandler down the stretch.

Hamilton's Kyndall Adams would then tie the game after an offensive rebound and put-back.  Adams would also get fouled on the play, but would miss the free-throw attempt.

After a driving basket on the baseline by Beatriz Martinez would tie the score with 1 minute left to play, Hamilton would look to take the lead but would get denied by the athletic defensive prowess of Jazmyne Bartee.  Bartee had held down the painted area all night long for Chandler, blocking a large number of shots and keeping her team in the game with a tremendous defensive effort.  Bartee would earn her 11th block of the game, while Hamilton would eventually take the lead back with :45 seconds remaining, 54-52.

After a missed shot attempt and a backcourt call against Hamilton, Chandler would eventually get the basketball back for one final attempt.  Chandler would miss a shot attempt in the final seconds, only to have Bartee rebound the basketball and convert a bank-shot off the glass to tie the game with :09 seconds left to play.  After Hamilton would fail to get a shot attempt in the final seconds of action, the game would go into overtime.

After running almost 3 minutes off the clock in overtime, Chandler would get a long two-point attempt from Jesse Ossian to give Chandler a 56 to 54 lead with 2:20 left to play.

After a few miscues, Hamilton would tie the game with 1:06 remaining after a steal in the open floor from Dickson, who would miss a contested layup.  Ashley Moore would rebound the miss and follow it up to tie the score.

But Chandler would come back again after a nice drive by Martinez and an assist to a cutting teammate, Skylar Ossian.  Ossian's layup in traffic would give Chandler back the lead with :50 seconds to play.

After another block from Bartee on a drive by Hamilton's Dickson, her 14th block of the game, Hamilton would get the loose ball and 5-foot-8 junior forward Shelby Hartman would convert a mid-range shot after an offensive rebound to tie the score, once again, at 58 all with :17 seconds left in the game.

With the score tied and it looking like a second overtime could be in the cards, Jesse Ossian would drive the length of the floor and score on a strong drive to the basket over defenders to give Chandler the two-point advantage, 60-58, with :08 seconds to play.

After Hamilton would fail to get a final shot off, Chandler would get the big road win - their fifth straight victory on the season.

"We don't worry about the rankings," said Chandler head coach Zon Thompson after the game.  "This team has what it takes.  Don't judge a book by it's cover."