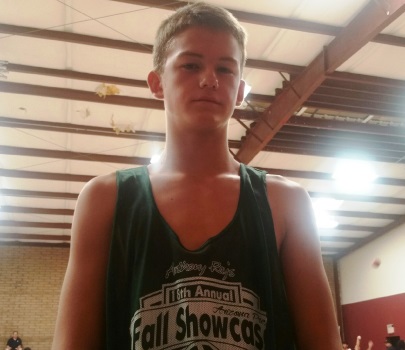 Sunnyslope High School's 6-foot-2 freshman guard Chance Garland is a serious basketball talent for the future, and after his superb showing in this year's event, it is obvious that this young man is definitely one of the elite-level talents in the 2020 class.

With such talented freshman prospects as Niko Mannion (Pinnacle HS) and Xavier Ducell (Mesquite HS) entering the high school ranks this high school season, Garland is on that same such level as a player currently - although most basketball enthusiasts in the state have not seen him.  Because this year's Arizona Preps' Fall Showcase was so well attended by some serious basketball scouts / writers, Garland benefited a great deal from the exposure he received in this year's event.

National basketball scout Jerry Mullen and regional scouts Gregg Rosenberg (Rivals.com) and Chad Groth (Area Codes), including myself and Chris Buchanan (Arizona Preps / Arizona Hoop Review), each marveled while watching Garland's performance in this year's event, as he stroked three-pointers consistently and almost at will, and created shots for hismelf and others off the dribble in a manner which suggested that he knew exactly what he was doing on the floor.  Garland proved that he is an elite-level prospect in this year's event.

While Garland is not a household name yet, that will change very soon, as college coaches read the reports of each of these top-rated scouts.  Garland will, no doubt, be a strong subject of each report, since he was among the top overall performers from this years' event.

Still a mere freshman prospect that has not competed yet in a varsity high school basketball game, Garland has a lot of time to develop and grow physically, which is almost scary when you consider his advanced skillset at such a young age.

Garland is a very fluid offensive talent with an excellent feel for the game and unlimited range on his pure shooting stroke.  He has a superior handle of the basketball and excellent body control already, while possessing a bouncy vertical leap that allows him already to dunk the basketball in a variety of ways and in trafffic, if the opportunity presents itself.  He is an excellent passer of the basketball as well, and enjoys finding an open teammate on the floor.  A complete offensive talent that has a long, lengthy body for his size and a very bright future ahead of him.

While it is still unclear as to what level Garland will play this high school season, since the Sunnyslope HS program is very talented and still young, and is also coming off a state championship runner-up performance.  No matter, over time this young man will advance at a high rate and become what he needs to become over time.  While the future is very bright for Garland, college coaches should start positioning themselves early for this one.