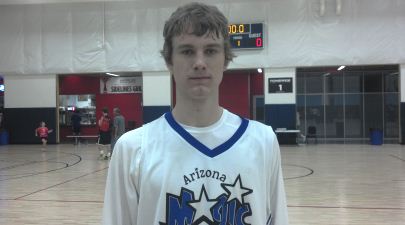 Cooke, an academic qualifier out of high school, decided that plan worked best for him.  While many student-athletes envision themselves having an opportunity to go to the division-I level after one year at a junior college, very seldom does it happen, as a result of the level of competition at the junior college level.  For Cooke, that is exactly what happened.

While spending one season at Central Arizona JC, Cooke was a major contributor for a loaded team of players that won the 2013 Arizona Community College Athletic Conference (ACCAC) league title.  Central Arizona would blow away their competition during the season - posting a 30-5 overall record on the season and an impressive 21-2 record in the conference.

Cooke would average 8.8 points and 5.4 rebounds per/game on a loaded team of college prospects.  Cooke would provide size on the wing, perimeter shooting and a long-range threat for a very athletic group of players that would roll through the conference and into Hutchinson, Kansas for the national tournament.

As a result of Cooke's play during his freshman season, the gifted and sizeable three-point shooter would earn himself his goal - a division-I scholarship to Abilene Christian University in Texas.

Cooke had considered many schools during his recruiting process in high school, including Southeastern Oklahoma, Mesa State and Nebraska-Kearney before deciding to head the junior college route, in an effort to maximize his college recruitment before moving on to a bigger school.

Cooke developed a great deal as a player in the spring and summer throughout his high school career, while playing under Brian Fabiano on his club program, the Arizona Redshirts – a team which Cooke played for since he was 10 years old.  Cooke finished his club career with the Arizona Magic program on a team of unsigned seniors which won several tournaments during the spring of 2012, including the Double Pump Spring Classic.

Cooke was among the state’s most sought after targets as a senior, as a result of his very good size and length and a serious shooting stroke, which he is able to get off quite often and with ease.  He also is left-handed – a nice feature to his game and making him tough to defend.  Cooke will be able to play at either a small forward position or as a shooting guard at the division-I level.  Cooke is also a good ball handler for his size and is capable of handling the basketball in the open floor.  He sees the floor very well and is a very unselfish player that is capable of making plays for himself or others.  Cooke is an adequate rebounder now, and as he continues to get stronger physically he will see his game take off a great deal over time with natural maturity.  He needs to focus as a defender to reach his maximum potential as a player.

Cooke is also a very good student and was a full academic qualifier out of high school.

Congratulations to Cooke and his family on this amazing accomplishment for himself.  His hard work and dedication to his craft has definitely paid off for this talented shooter.

Arizona Hoop Review Scouting Report: Cooke was among the most attractive targets in Arizona’s 2012 senior class.  A big 6-foot-7 shooter with excellent range on his shot and a quick, left-handed release.  Cooke is a natural shooter with size – a nice attribute.  He is fundamentally sound and is capable of stretching the defense consistently, while also being able to post up and score effectively around the paint with a variety of moves.  He possesses very good footwork and gets into triple-threat position with the basketball in his hands.  He is a good ball handler and passer, making him very versatile as a wing prospect.  He is a solid rebounder.  As he continues to put on size, and his frame suggests that he will be able to quite well, he will see his offensive game really take off.  A very good passer that has an unselfish attitude and is a great teammate.  A very good looking prospect that should develop nicely over time, and has good upside.