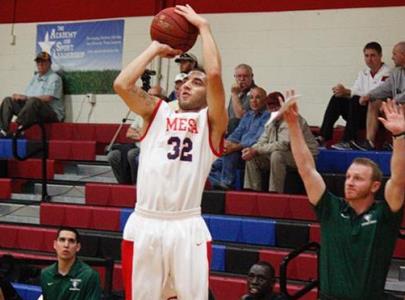 The 5th Annual Fiesta Bowl Junior College Shootout took place Saturday on the campus of Mesa Community College with numerous college coaches in attendance to catch some of the top junior college prospects and teams in action.  There are two Arizona junior college teams in participation for this exciting annual event, and both schools would advance to the tournament's semi-finals on Saturday.

First, Central Arizona JC (11-2) led by new head coach Tremaine Aaron would face top-rated Midland Junior College (TX), led by head coach Jordan Dreiling.  The game would feature Dreiling matching up with his old program, as Dreiling was formerly the head coach of Central Arizona.  While neither team would particularly shoot the basketball well from the field in the game, Central Arizona would overcome a narrow deficit at the half to outscore Midland JC (9-4) 50-40 in the game's second half to win the game.

Central was led by the play of 6-foot-4 sophomore guard Torrian Epps (Portland State signee) who finished with 22 points and 8 rebounds in the win.  6-foot-1 sophomore guard Malik Thames was impressive in the win - finishing with 19 points, 8 rebounds and 5 assists.  6-foot-8 sophomore forward Brandon Rosser would contribute 14 points.

Midland JC was led by the strong play of former Arizona native and Basha HS graduate Torren Jones.  Jones who transferred to the program after leaving the University of Missouri, poured in a game-high 24 points and 13 rebounds.  Jones ran the floor hard and finished strong at the rim.  While not having a particularly strong first half, Jones was the catalyst for Midland in the game's second half.

Central Arizona will face San Bernadino JC on Sunday in the semi-finals at 8PM.

Host Mesa Junior College (7-3) also advanced to the tournament's semi-finals with an impressive 90-65 win over Williston State (ND) in the first round of the Fiesta Bowl Junior College Classic Saturday.  MCC went on a 34-7 second half run to turn a 51-44 deficit into a 78-58 lead.  MCC trailed most of the first half and was down 42-36 at the half beforeigniting in the game's second half.

Mesa 6-foot-2 sophomore guard Khari Holloway scored 16 of his 20 points in the second half, while 6-foot-1 sophomore guard Andrew Jones (pictured) led all scorers with 23 points, including 17 points in the final 20 minutes.  Mesa JC 6-foot-9 freshman post Kyle Bingham contributed 14 points and 8 rebounds in the win.

Mesa will play Monroe JC (NY) at 6PM Sunday in the semi-finals.